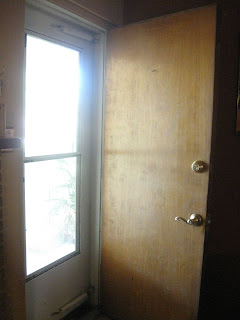 One of the great things I've discovered about writing a blog is that I can tell my side of the story the way I want to tell it, completely unobstructed by the objections of others, or even the truth.  In this case, I get to tell the story of a fight Elizabeth and I just had, the way I feel it should be told.  If she doesn't like it, well, she can get her own blog.

Elizabeth and I got into one of our uglier fights this week.  The cause?  Well, when taking my daughters to swim lessons yesterday afternoon, I apparently forgot to lock the front door.  Actually, I didn’t forget to lock the front door; I forgot to close it first, and then lock it.  She came home before we did, found that I left the door open, and apparently spent the intervening time thinking of exactly how she was going to, as my dad would say, “tan my hide.”

For the record and in my feeble defense, the front “door” actually is two doors: a regular wood door and a glass storm door.  I didn’t leave them both open, just the regular door.  However, I didn’t lock the storm door either, and being glass, it was kind of easy to see that the inside door was not closed, especially since there were no cars in the driveway and the house gave the appearance of being completely unoccupied.  Still, it’s not like I was letting all the cool air inside the house out, or as my dad would say, “air conditioning the outdoors.” I would hate for anyone to think I was being environmentally negligent.

The kids and I come back from swim lessons around six.  One of my sisters happens to be there, dropping off her daughter for a sleep-over, so doesn’t jump me immediately, like in some bad ghetto movie. Instead she brings it up casually, almost light-heartedly, in a ‘Can-you-believe-what-my-silly-man-did-today?’ way.  So I play it off just as light-heartedly, in a ‘Oh-my-God!-As-soon-as-my-sister-leaves-I’m-dead!’ way, and immediately begin checking, as discreetly as possible, for any blunt, heavy objects that need to be secured.

Now, I happen to have a long and distinguished criminal record when it comes to leaving doors unlocked, and I know just how frustrated is with me when it comes to this particular foible.  My best hope, I reason, may be to use my sister’s daughter as a human shield.

My sister leaves a short time later, despite my efforts to telepathically convince her that the roads are too dangerous for driving and that she’d be better off spending the night herself.  However, by that time I’ve already formulated a plan.  I’ll use the bathroom while is organizing the kids’ activities (I’ve had to go since we left the house), and then I’ll sneak out back and start mowing the lawn.  That way, I can pretend not to hear her when she yells for me.  If I handle it properly, I can probably drag out the yard work until eleven or so, and then maybe sneak back in, lock myself in the bathroom under the pretense of “stomach problems,” and spend the night on the toilet.  All I need then is for temporary amnesia to strike sometime during the night, and I’m home free. Foolproof.

I never make it past the bathroom.  Somehow, in the span of three minutes, she’s arranged for the kids to be happily engaged for the next two hours, if need be. She corners me.  She has blood in her eyes.  My blood.  I thought I had finished peeing.

“Uh-” I stammer, “I was gonna go out back and-”
“All I want to know is,” she begins, fixing me with a withering eye, “what if a murderer walked right in, because the DOOR was open, murdered Chubby (our dog), and then waited for me and murdered me when I got home?  How would you feel then?”

“Terrible?” I kept my answer short, because I could tell she intended to unload on me faster than a fully automatic Kalishnikov.

“Uh-huh.  Tell me this, Thorson.  What if a robber came in, because the DOOR was open, befriended Chubby, took all our stuff, waited for me and then raped and murdered me? What would you think if you came home to that?”

“What if a sex offender -you know there are some in this area, we’ve gotten the notices!-  because the DOOR was open, hid in our house, and raped me and your daughters?  How would you feel about yourself then?

“As bad as those other ones you said.” I felt like that guy in The Godfather, the one that gets it at the toll booth.

“I know this is all a joke to you.  Obviously it is, or you wouldn’t keep forgetting to lock the doors.  Remember that time you left the back door open all night?  You’re basically inviting someone to come in and kill us.”   I literally can’t stop myself from picturing billboards and neon signs placed all around the perimeter of our property, saying things like, “Free victims!  Right this way to innocent people!  Slake your thirst for human blood!  Come on in!  We’re always open!” with giant yellow and red arrows all pointing to our front door.

She can tell I’ve slipped off momentarily, and the boiler inside her shoots up to a dangerously high pressure.  I instinctively check the room again for impromptu weapons.  However, at that moment, our niece comes in.  “Auntie, is it OK if Maria plays with the carrot peeler?”

“Oh, no sweetie,” says with incomprehensibly swift gentleness.  “Let’s go take care of that.”  Without another word to me, they join hands and leave the room, swinging their arms softly, my niece skipping lightly.  If they were each holding a balloon, it would have looked like they were enjoying a beautiful day at the park, except when shoots me a final shriveling look, just to let me know she hasn’t become a sudden victim of Alzheimer’s.

Distractions, as many as I can manufacture, prevent us from connecting until much later that night, about the time I am trying to come to bed.

“Seriously, Kev,” I hear from the dark, her voice a dangerous low growl, like the sound of a disturbed jungle cat, “what if some crazy psychopath came strolling in here and raped and murdered your wife and daughters?  Would it bother you at all?”

“I don’t know.  Was it because the DOOR was open?” It’s nice to know that, even in the face of imminent destruction, I possess an unbreakable sense of sarcasm.

Not surprisingly, it didn’t do much to assuage her anger. Like a venomous snake attacking the oversized tires of a jacked-up 4x4, it all came out as hissing.  She quietly accused me of not being concerned about the safety of my family, and claimed that I ‘continually’ forget to lock the door because I just don’t care enough about her and my two girls.  And her words actually got to me, because she sounded like she sincerely believed them.  That, in turn, set me off.  How dare she genuinely doubt my commitment to my family?  I cut loose, whisper-shouting an angry response, doused with every bad word I can think of, many of them multiple times, in case she missed the first ones.

“I’m done,” she says, “I’m done, I’m done.” She turns her back to me in the dark, and in case I was too dense to realize it, she adds, “You’re going to sleep in the back room so you can keep an eye on the girls, right?”

I grab my pillow. “Exactly what I was thinking.”

I throw my pillow on the sofa in the living room, and sit down at the computer.  The girls are in the back room, watching a movie with the volume way too loud.  I pull up Thesaurus.com, to see if I can find any more creatively bad words in preparation for our next round.

A few minutes later, pokes her head out of the hallway.  “By the way,” she breathes vindictively as I swivel around to face her, “I don’t deserve to be spoken to like that.  That was @#$!%#* immature.”  Her head disappears again.

Oh, we do know how to press each other’s buttons, don’t we?  She always has to have the last word.  I sit there, as my dad would say, “stewing in my own juices.”  Not this time! I stalk down the hall, stand at the foot of the bed, and deliver my reply:  “By the way,” I spit out in hushed tones, “You can’t say that you’re done, and then come back out five minutes later and say something else. If it’s done, it’s done!”  I march away without waiting for a response, claiming victory.

They say that no matter how old we get, there’s always a child that remains inside. They say that like it’s a good thing.  I let my inner child out last night, but it wasn’t to enjoy the rainbows and play with the butterflies.

I fall asleep wondering why I did forget to lock the door.  Why do I do dumb things like that?  What is wrong with me?  Do I sub-consciously really wish to see my family destroyed by roving gangs of open-door thieves and murderers?  What does it say about me that I keep doing this stupid, stupid thing, especially when I know how much it bothers ?  These questions interrupt my slumber throughout the night, or maybe it is just the sofa cushion sticking in my back.

Check back soon for the exciting conclusion to "The Open Door."
Posted by Kevin Thorson at 7:21 AM