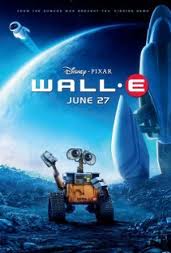 WALL-E wasn’t one of Pixar’s bigger hits when it came out in 2008.  I remember being somewhat disappointed by it at the time, although I couldn’t quite figure out why.  Many critics raved about the film, and more than a few still place it near the top of the list of great Pixar movies.  I find this somewhat irritating, because I hate it when I think I might have missed something I really wanted to get.  WALL-E didn’t connect with Elizabeth or Jessica either, resulting in it being one of only three Pixar movies we don’t currently own (Cars and Cars 2 are the others).  Since we don’t have our own copy, I made a point of DVR-ing a recent Disney channel showing of the film.  Then one quiet evening last week, I sat down and watched WALL-E again.  I wanted to give it another chance to speak to me; or failing that, try to figure out why this movie didn’t connect with me at the level so many of Pixar’s films do.

After watching a second time, I can acknowledge that there is much to agree with the critics about.  Pixar created a wonderfully expressive character in the robot WALL-E, who conducts his daily business while longing for love and for a connection to something more than a cockroach in his trash-heap world of endless desolation.  Following him in his day-to-day life is by far the most fascinating and entertaining part of the movie.  It is extremely well-crafted, revealing bits and pieces of the background story creatively and seamlessly, helping the viewer to understand where we are, what has happened, and WALL-E’s purpose without the need for dialogue.  It is a tremendous exercise in visual storytelling, and I don’t think I gave it enough credit in this respect the first time.

As the film unfolded, I was reminded that there are several definite biblical undercurrents in WALL-E.   In the strange, new world of the Earth’s future, WALL-E represents the original man, a new kind of Adam.   Although he was originally created as just one of a global army of trash-mashing robots charged with the task of cleaning up our tragically waste-covered planet, WALL-E is the only one that continues to function some seven hundred years later.   By being the last one standing, WALL-E becomes, in a way, the first.   Almost immediately, we learn that he is painfully aware of being alone.  He picks up odd pieces of junk and artifacts that connect him somehow to the people that once existed there, and he repeatedly plays an old VCR tape which reveals his yearning to love and be loved. 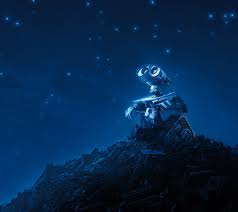 Just as Adam was lonely in the Garden, WALL-E is lonely in the toxic dump where he lives.  In the bible story, God sends Adam a mate, a woman; in the movie, the far-distant humans send a sleek, new female robot who accidently finds WALL-E.  Both females are named Eve.  Much of what follows in the film is a love story between WALL-E and Eve.  In the climax, WALL-E performs a Christ-like act of self-sacrifice to make possible a rebirth of life on Earth, although in Wall-E’s case, it is literal and not spiritual life.


The story of Noah and the flood is also woven into the subtext of the movie.  Instead of a flood of water, though, the humans flee in spaceship arks from a self-inflicted flood of garbage and debris, the planet-choking result of consumer society run amok.  The flagship of the flotilla is the Axiom, and it is there that most of the movie’s second half is set.  As befits an ark, the humans aboard the ship are little better than animals, more like cattle or sheep, although the movie is very careful to show us they haven’t completely lost their humanity.  But the synthetic luxury in which they are immersed has rendered critical thought and independent action obsolete.  Weakened gravity and the elimination of any need to work for anything has led to a listless, self-indulgent, slug-like state of existence.  Even the captain is rarely faced with a decision of consequence; his great pride as leader comes from making the daily announcements.

It’s interesting that the name of the ship is the Axiom.  In sloppy, careless movies, names can often be random; but in thoughtful, tightly-crafted films, names usually mean something.  The Axiom is certainly not a typical name for a spaceship, a boat, or for that matter, any mode of transportation, which is another clue that it’s intended to be symbolic of something.  By definition, an axiom is a statement widely accepted as being so obviously true that it doesn’t need to be proved.  I don’t know why the ship is called the Axiom, but I wonder if it has something to do with questioning the motivation of an obsessive consumer society, which places comfort, convenience, and pleasure above all other priorities.

The movie seems to be asking us to look a little further down the road we’re currently on, and see what happens when the individual pursuit of happiness, that great chase sequence of human history, ends with the capture of the exalted prize, at least as it has been defined for us by a consumer mass culture.  Comfort, convenience and pleasure are powerful motivators that have driven us ever onward to new, dizzying technological heights.  But they can be equally powerful demotivators, WALL-E points out, once they have been attained.  The incentives to grow, to adapt, to question the way things are, and find new ways are removed, and the critical skills they tend to cultivate begin to atrophy, just as the corpulent bodies of the passengers aboard the Axiom have.  The movie tells us that once you replace the pursuit of happiness with the possession of it (or at least its material proxies of comfort, convenience and pleasure), it is human nature to become complacent and self-absorbed. 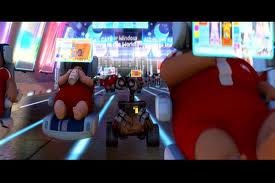 That’s exactly what happens to the people on the Axiom.  Everyone is so caught up in his or her own personal enjoyment that they stop thinking beyond themselves, stop thinking beyond the current moment.  They stop thinking about what’s good, and what’s right, even for themselves, in favor of what feels good, what brings easy pleasure.  Moreover, WALL-E uses small, revealing moments to reinforce the fact that these are not bad, mean, intentionally selfish people, as we might like to think; no, these are are good, typical, everyday people, people like us.  They have just been completely seduced by a cleaner and more compact version of the same kind of ‘happiness’ that led their forebears to ruin the Earth.

So what’s the axiom that the Axiom is meant to represent?  I'm still not sure.  I can’t think of a maxim or adage that captures this complicated idea in a simple phrase.  Maybe it’s more just the idea that if we don’t rethink our current addiction to mindless consumption, we are headed for a bleak future, whether it’s on Earth or in space.  It’s not a message that many of us want to hear, and maybe that helps to explain the movie’s relatively poor (for Pixar) reception at the box office.

But I don’t think that’s why I didn’t connect with WALL-E.  I don’t mind hearing that message; in fact, I welcome anything that makes us think more carefully about what we’re doing, or that makes us a little more aware of things that need fixing.  Part of Pixar’s magic is that it’s able to blend profound statements about life and about how to live life well with hugely engaging and entertaining stories.  All the Pixar movies offer some kind of critique of modern life or human nature, some more obviously and some more eloquently than others.  I just think that, in this case, the result wasn’t highly effective. WALL-E wants to be a love story between two robots, but somewhere along the way it turns into a cautionary tale for humanity.  Those two divergent themes put the film on parallel tracks, and those tracks never really integrate, they simply run side-by-side to the end of the film and stop.  Yes, in the end WALL-E and Eve are happy; they have each other and they are now free, presumably, to be together forever, or until WALL-E runs out of replacement parts, as he is somewhat accident-prone.  The humans arrive back on Earth to begin the process of restoring life to their home world.  The two ends are not contingent on each other.

In fact, the return of the humans to a planet where pitifully little has changed is problematic at best.  The film attempts a hopeful ending, but it just doesn’t ring true.  The passengers of the Axiom are in no shape to reclaim the Earth from their ancestor’s excesses; they can barely waddle off the ship.  At least Noah had some strong-bodied sons and plenty of open land to work with.  What’s going to happen to the vast majority of the Axiom’s toddling slugs the first time they encounter one of those dust storms whipping up deadly blizzards of shrapnel from the surface?  Is the captain going to stick around once he realizes that pizza doesn’t grow on a plant, and that it takes at least twelve different kinds of plants to make a proper pie, including the ones needed to grow feed for the livestock they don’t have?  How many of those bone-soft people are going to be willing or able to clear the land and till the soil, especially once it becomes obvious  that it means breaking a sweat?  Ten bucks says within two weeks the Axiom’s putting light years on the old odometer, and that’s only because it will take them that long to crawl back onto the ship.

That’s part of what’s off with this movie.  We are asked to believe that people who have it far easier than we do would choose to make their lives infinitely more difficult than ours, especially under those circumstances.  The movie offers us no motivation to explain such a radical change in attitude.  It contradicts with what the movie itself has told us about human nature, and what we know of ourselves.  It undermines the intended life-affirming message, and unintentionally shifts our focus back to the negative side of our nature.

Ultimately, what WALL-E does is teach by non-example, by showing us what we shouldn’t do.  We shouldn’t allow ourselves to become too complacent and lose ourselves exclusively in our own selfish little worlds.  We risk disaster when we do so, both individually and as a species.  It’s an important and valuable message.  But one of the things that make Pixar movies so special is that they don’t dwell exclusively on what’s wrong; they always seek to illuminate in a beautiful, poignant way, what’s right.  That’s the precious quality that lifts them beyond the realm of simple children’s movies, and why the very best of them are invited to take up permanent residence in our hearts.  WALL-E is proportionally unbalanced in this regard, a victim of too much emphasis on the problems we face, and not enough on positive, productive ways to confront them. 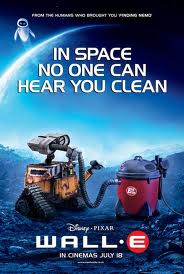 I believe that’s why I didn’t ultimately connect to WALL-E the same way I did with other films like the Toy Story series, Up, and Finding Nemo, among others.  Despite the genius of the first part of the film, I guess I still agree with my preliminary gut reaction.  It’s a very good movie, it has much to recommend it, and it’s well worth watching more than once, but it will never be one of my favorites.  At least now I feel like I have some idea why.