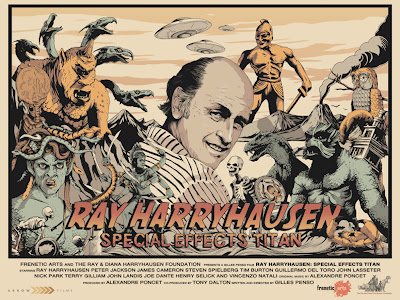 Let’s take a few moments to mark the passing of Ray Harryhausen, the master of stop-motion animation, who died on May 7th at the age of 92.  Ray was best known for creating movie monsters.  Not the kind that could be played by a guy in a rubber suit with a face buried under twelve layers of spirit gum, but mythical, sometimes grotesque, sometimes majestic, largely nonhuman ones. 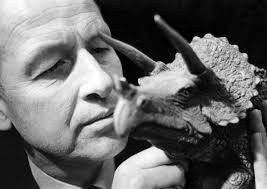 To do this he created highly detailed miniature models, which he would pose and then photograph one frame at a time, twenty-four different times in order to produce one second of film.  If my math is correct (always a dicey proposition), a five-minute scene would require somewhere on the order of 7,200 separate ‘shots,’ with each shot usually requiring multiple minute adjustments to the model (or models).

And somehow, the man lived to be 92.  He must have possessed the patience of Job, along with the gumption of a sea barnacle.

The resulting animation was then typically incorporated as seamlessly as possible into the live action of the film, so that it appeared that some gargantuan reptile or sea monster was sharing the screen with Jason and the Argonauts, or battling Sinbad and his crew, or conquering , or stomping on , or whatever the case may be.

If you go back and look at his work, what becomes obvious is his attention to detail and stubborn commitment to producing the best results possible.  This wasn’t the kind of guy who was content to glue bits of latex to a lizard and call it a Dimetrodon.

Yet, although I’ve always had great respect for Harryhausen’s work, I can’t say I’ve always been a huge fan of it.  I think that’s due to timing more than anything.  My first movie experience was Star Wars, and the problem with that is the film’s special effects were so spectacularly effective that it rendered the inherently unbelievable perfectly believable (at least to my nine-year-old mind).  Star Wars created an artificial reality so unhindered by the obvious presence of a magician’s hand that my imagination was completely immersed into it, and the resulting experience was absolutely thrilling.  Once that happened, once I had the realization that such a thing was even possible, well, there was no going back, no settling for less. 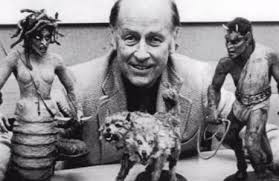 And, unfortunately, Ray’s stop-motion animation, while it was performed at the highest possible level, could never quite clear that final barrier to believability.  His creations, as careful and nuanced and detailed as they were, always struck me as what might happen if Dr. Frankenstein, after his first giddy taste of success, went on a resurrection spree and brought an entire menagerie of prehistoric monsters and mythical beasts back to life.  Plodding, stone-footed cadences; each creature a staircase series of frozen motions, the perpetually nagging sense of knowing that you were watching an inanimate object imitating a living thing; those are the unfortunate constraints placed on Ray’s work.

None of which was really his fault, though; he was simply bumping up against the ceiling of the technology that existed at the time.  To his tremendous credit, he pushed the process of stop-motion to its absolute limits, and extracted from it a certain kind of effectiveness which no one else could quite match as successfully.

Besides, anyone with an understanding of the tedious, precise, unforgiving nature of the work involved in model animation (setting aside the vast array of additional problems introduced by blending animation with live action) has to admire what he was able to accomplish.  I acquired my keen sense of appreciation by making several stop-motion films as a kid.  With Rob, my friend and partner in crime, we learned two great lessons from these experiences.  One was that making stop-motion movies was easy; the second was that making stop-motion movies that weren’t hopelessly cheesy was next to impossible.
Read more »
Posted by Kevin Thorson at 9:53 AM No comments:

So, everybody who reads thunderstrokes knows that I’m working on a novel based on Greek mythology.  The Adventures of Hercules Mendoza is a reimagining of the classic story of Hercules and the Twelve Labors.   Except in this version, Hercules is a fourteen-year-old (almost fifteen) Mexican-American boy who lives in the rather nondescript Southern California town of , a suburb of .  His father has recently remarried, some three years after the death of Les’ mother (by the way, he prefers that you call him Les and not Hercules; you’ll understand why when you meet him), and the arrival of this strange new woman changes everything for the worse.  His father seems different, and their relationship is growing more difficult and confrontational day by day.  Furthermore, Les is convinced that this new woman does not like him, even though she pretends artfully enough whenever his father is around.  He has the distinct feeling that she would prefer he were somewhere – anywhere – else.  Naturally, he can’t stand her.

, if you don’t mind me deviating briefly, is Spanish for ‘the box.’ If you’ve ever been in (perhaps passing through on the way to , like most of us half-baked Arizonans), you may have noticed that the town is hemmed in by hills and mountains on three sides, thus the name .  However, the idea of boxes, and being boxed in, and how to break out of the boxes we occasionally find ourselves in, or put ourselves in, happens to be a central theme in the novel.  Purely serendipitous choice of location, as it turns out.

By now you may be beginning to wonder where the Greek mythology comes in, as the story seems to concern itself primarily with the adolescent angst of young Les Mendoza.  Well, hang on now; don’t get your chiton in a twist.  Even though the story is set in contemporary, post-9/11 , Greek mythology does play a powerful role in the book, exerting an undeterred influence on everything that happens to our pobrecito protagonist.  As if he didn’t have enough worries to keep him going, Les finds himself transported one day to a bizarre and barren realm, where he subsequently learns he has been given the opportunity (read:  he has no choice at all in the matter) to attempt the same daunting feats once accomplished by the great Greek hero himself.

If only Les had been paying attention to all those stories about heroic Hercules that his aunt Lucinda liked to tell, and that he despised so much.

Well, what you don’t know can’t hurt you, right?

Read more »
Posted by Kevin Thorson at 12:18 AM No comments: