Alright, I already told you mine (see above), now you choose your preferred headline for today’s post:

The headlines may be fictional, but the inspiration for them isn’t, as our neighbors over in can attest. 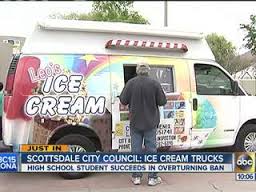 You might say it has churned up some controversy.

Alright, forget about the bad puns.  The fuss has to do with the city council’s decision to allow ice cream trucks, which had been banned by the city since the seventies, to once again ply their wares on residential streets.  Children all over the city broke into spontaneous rejoicing at the announcement, although many of them didn’t know exactly what they were cheering for, having grown up without the merry, jingling vehicles that tend to pass by their houses just in time to ruin their appetite for dinner, but were instead cheering the general concept of ice cream, and expressing their enthusiastic approbation for anything that might make it easier to get some.*

*For all those poor, deprived kids in , I have provided a link to the Wikipedia page for ‘ice cream truck,’ which gives a comprehensive description of the vehicle as well as a general overview of the service the operators provide. 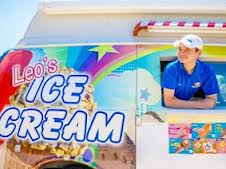 Who is it that all those children, not to mention all those other people who are just too lazy to drive to the corner to buy their Choco-Tacos, have to thank for this remarkable reversal of fortune?  The unlikely hero (or villain, depending) is an 18-year-old high school senior by the even unlikelier name of Leo Blavins.  Almost two years ago, Mr. Blavins bought an ice cream truck for the purpose of starting a business, only to discover that the reason he thought it was such a good business opportunity – namely, the conspicuous lack of ice creams trucks in the area – was not due to some oversight on the part of hapless fellow entrepreneurs, but because the practice had been prohibited by city ordinance long before he was born.  While most of us, especially at the tender age of sixteen, would have frozen up in the face of such obvious futility and focused instead on turning our ice cream trucks into supreme-mega-ultra party vans in time for prom, Mr. Blavins chose to challenge the status quo.  It only took eighteen months, but last week’s announcement means he will at last be allowed to realize his greatest dream, which, if it were me, would be to drive up to the steps of city hall in said ice cream truck, hand out complimentary fudge pops to the recalcitrant members of the city government, and tell them to stick it where the sun don’t shine.

But, perhaps Mr. Blavins isn’t as vindictive as I am.

That’s why they have to be fudge pops.
Read more »
Posted by Kevin Thorson at 3:31 PM No comments: 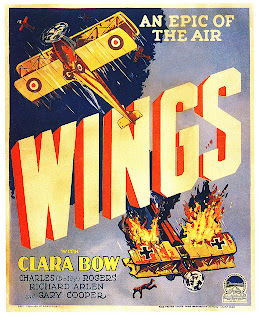 By all accounts, Wings was a huge success when it opened in 1927.  The silent film set during WWI wowed audiences and critics alike, and went on to garner the first Academy Award for Best Picture, the only silent film to win until 2012’s The Artist.*

*The Artist is a silent film, despite that one scene at the end, and no matter what purists and nitpickers have to say about it.

With that kind of success, you would think more people would be familiar with it, and that it would have some sort of lasting legacy.  But something happened to Wings over the last eight decades.  It’s gotten lost.  These days, it rarely shows up on anyone’s list of great movies, and doesn’t seem to rate much discussion even amongst hardcore fans of silent films (now there’s a group you don’t want to run into in a dark alley).

I used to pore over the lists of Oscar-winning movies, looking at the titles and imagining what they were about.  As a thirteen-year-old kid, I set a goal to learn about and see every movie that won the Best Picture Oscar, a goal that would officially be declared dead only in 1998, when The Great Atrocity occurred, and the Academy awarded Best Picture to Shakespeare in Love over both Saving Private Ryan and Life is Beautiful.  But Wings was always an enigma.  The books about the movie industry and filmmaking that I got from the library offered little enlightenment, other than mentioning its historic role as winner of the first Oscar for Best Picture.  Duh.  In college I took some film analysis classes, but Wings was not one of the movies we dissected, or even obliquely discussed.  It was as though the film was no more than vapor, a see-through ghost, a spirit that everyone seemed to know was there but that no one seemed particularly inspired to acknowledge. 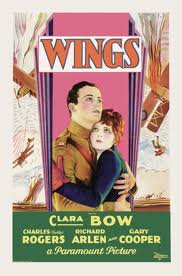 A pretty sad thing to be, if you’re a movie that was once loved, I would think.

Fortunately, Paramount Pictures released a fully restored version of the film in commemoration of its 100th year as a film studio last year.  And TCM, serendipitously for me, included it in their annual “31 Days of Oscar” movie cavalcade in February, finally affording me the opportunity to see this elusive film.

Thank you, TCM.  My life-debt to you is increased yet again.  I know I’m late on my payments.  Please don’t refer me to the life-debt collection agency, and please don’t send someone to repossess me.  My wife would be so disappointed to come home one day and discover I’ve been repossessed.

Anyway, here’s the thumbnail sketch of the movie:

It starts with two young men who are rivals for the affections of the same girl.  Jack (Buddy Rogers) is clever, daring and poor, while Dave (Richard Arlen) is reserved, smoldering and rich.  I’ll leave it to your imagination to decide whom Sylvia (Jobyna Ralston) prefers.   Meanwhile, Mary (Clara Bow) is totally enamored with Jack.  Beyond their petty little problems, however, World War I is raging, and although these youthful dreamers don’t know it yet, is just about to send four million lover-boys into no-man’s land.
Read more »
Posted by Kevin Thorson at 3:41 PM 1 comment: