Pat Tillman Does Not Belong in the NFL Hall of Fame 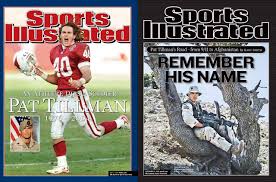 It's been twelve years now since ol' number 42 (40) died.  This past Friday, on the anniversary (funny word for marking the passage of time for a death, isn't it?) of Pat Tillman's passing,  NFL commentator Chris Collinsworth tweeted the following:

"If it were my decision Pat Tillman would have been a 1st ballot Hall Of Famer."

It was a gracious thing to say, a gesture of remembrance and respect.

Peter King, the venerable columnist for Sports Illustrated, responded to the tweet by saying,

He then went on, apparently forgetting that brevity is the soul of wit, (not to mention the soul of Twitter):

"IMO: Silly to confuse patriotism with athletic greatness. Some will disagree with me. That’s fine. It’s a free country."

Predictably, his open invitation to disagree with him ignited a Twitter brush fire that he then spent the remainder of the day trying to fight, basically by saying the same thing over and over:

"Football players should be judged for the Hall of Fame based on their football credentials. Nothing else."

"My feelings about this, as a voter for the Hall, is players should be judged for football only. Nothing else."

Read more »
Posted by Kevin Thorson at 2:11 PM No comments: 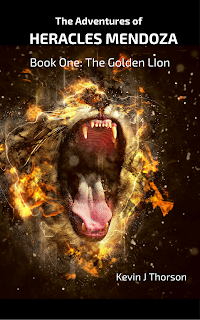 “Nervous?” Lisa said, casting a glance at Les’ rapidly jiggling leg.
“No,” Les replied. His leg stilled.
“So, how was it staying at nana’s and tata’s? How’s ?” she asked.
Les shrugged. “Okay.”
“Did nana make her green chile?” Les didn’t respond. Lisa gave him a prolonged glance. “Talkative today, aren’t we?” she said archly.
Les said nothing, just stared straight out the windshield as they raced along the freeway.
As she drove, Lisa’s eyes flitted between the road and her brother. “You’re nervous about flying by yourself, aren’t you?”
“No I’m not,” he answered curtly. In fact, Les was nervous about the flight to Seattle, and growing more so by the minute. But he knew better than to admit it to his older sister. Years of bitter experience had taught him that.
“So what’s bothering you?”
“I’m fine, Lisa. Just drop it.”
Lisa was silent for a few moments. “Les, it’s okay,” she said, her voice assuming a softer, lulling quality that Les knew all too well. Here it comes. The heartfelt invitation to spill my guts. How many times have I fallen for that one? It was her one of her most effective tactics, and it always began the same way: she would ply him relentlessly with sincere, sisterly overtures to confidence. He could tell her anything, she would say. She would listen to him without judging, no matter what it was. Mom and dad would never find out. And she sounded so authentic, so convincing, that, even though he knew she was lying, she would still somehow persuade him into believing her. He would reveal whatever dark, horrible secret he was hiding, or the embarrassing incident at school, or the lamest, most stupid little thing; it didn’t seem to matter how big or small it was. It only mattered that she could get it out of him. Well, not this time, sister.
Les leaned back, looked sideways out the door window. The city of sparkled in the bright blue sunshine, the towers and skyscrapers stark and straight and proper against the ocean. Behind them, the graceful curve of the rose and dipped.
“So, how’dja do in your games?” she asked after a time.
Oh, like I don’t know this one, Les thought. Change subjects, get me to lower my guard, and then come back in for the kill. You’re being way too obvious, Leese. Hardly one semester away from home, and you’re losing your touch. “We went one-and-two,” he said finally, in answer to her question.
“Oh,” she said. “Not so good, huh? What happened?”
Les shrugged as if it wasn’t important.
“So what team are you on this year? JV?”
Les nodded once. If she was set on dragging something out of him, he was going to make her work as hard he could.
“Well, that’s good,” Lisa replied, undeterred. “I mean, at least you’re not on that freshman team you hated so much last year.”
Les stared down at the floorboards. “Yeah, well, that really wasn’t an option, since I’m a sophomore now,” he said acidly.
“I know that. I just meant, well, I mean, you made the cut, right? Plus, now you get to be on the same team with your bestie, so life’s a beach, no?”
Les turned from the window, leveled his eyes coldly at his sister. “Yeah, it’s a real beach.”
She looked at him, perplexed, until she had deciphered his response. “What, Omar made Varsity?”
“Of course he did,” Les said, “because that’s how things always work for me.” He paused, and then groaned loudly. “No, that’s not fair,” he said. “I mean, he totally deserves it. He led JV in scoring last year. Offensive rebounds. Steals. He was their best player, hands down. ‘Course it didn’t hurt that he grew five inches in the last twelve months.”
“Really?” Lisa said, evidently surprised. “So what is he now?”
“Six-one-and-a-half,” Les said. “He said his doctor told him he probably had four or five more inches left to grow.”
“Omar?” Lisa said, surprised. “In eighth grade, you two were the almost the same height.”
“Thanks for the reminder,” Les said icily. Then, sensing an opportunity to take a shot of his own, added, “Besides, you haven’t been around in forever. If you had, you would’ve seen him.”
Read more »
Posted by Kevin Thorson at 10:41 PM No comments: