Use the Mouse, Luke - Things You Didn't Know About the Disney-Star Wars Deal 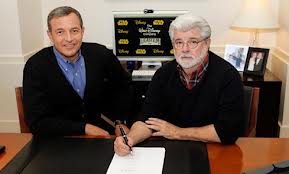 In the aftermath of last week’s movie industry bombshell in which Disney announced it had reached an agreement to purchase Lucasfilm, George Lucas was asked why he decided to sell the company he founded over 40 years ago, the company which is the home base for all things Star Wars.  “I felt that it was my responsibility to make a decision that would be in the best interest of the shareholders of Lucasfilm,” he replied.  When questioned further, specifically about the fact that Lucasfilm has exactly one shareholder – who happens to be George Lucas – Mr. Lucas stated, “That’s what made it so easy to figure out what our best interest was.”

Asked if he felt the 4.05 billion selling price was fair, Mr. Lucas is said to have removed his solid-gold loafers to shake out a small nugget, adjusted his top hat, squinted through his monocle, and said, “Look, Disney just acquired an entire universe.  On a square-footage basis alone, any real estate agent in the world would tell you that Disney got a steal.” 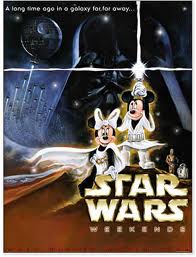 During another interview, he was asked when he first began to seriously consider the idea of selling Lucasfilm.  Mr. Lucas replied, “I can tell you exactly when it was.  Bobby [Robert Iger, President of Disney] and I had just sat down to lunch, and he started using the ‘b’ word.  As in ‘billions.’  Before that, I wasn’t thinking about it at all.  In fact, I was thinking about whether to order the manicotti, or the veal scallopini.  I went with the veal.  It was okay.”

In a thunderstrokes exclusive, we found a source close to the Lucas-Disney negotiations who was able to corroborate Lucas’ version of events.  Matt Gary is a waiter, Star Wars fanatic and aspiring screenwriter who traded tables with another server in the hopes of pitching a concept for a web-based Star Wars series to the movie mogul.  He recounts for us exactly what happened on that fateful day.  “He did.  He absolutely did.  He had the veal, even though I told him that the manicotti was the specialty of the house.  But when a man like George Lucas says he wants the veal, you bring him the veal, you know?”

On the subject of the blockbuster deal, Mr. Gary said, “Well, Mr. Iger said something like, ‘We want to buy Lucasfilm from you, George.  What’s it going to take?’ and George said, ‘hrmf falrefa,’ or something like that; it was hard to tell because he had just taken a hefty bite of his walnut salad with raspberry vinaigrette – a salad I recommended, by the way – and then he held his finger up, and then he finished chewing, and then he swallowed, and then he took a drink of water, and then he cleared his throat, and then he dabbed his mouth with a napkin, and then he said, ‘I’m not selling Lucasfilm, Bob, but thanks for the interest.’ I remember that part very distinctly because he still had a little dressing in his beard, and it was kind of glinting in the light.  Anyway, then Bob – I mean Mr. Iger – says, ‘How’s four billion sound to you, George?’ and George kind of chokes on his focaccia – not eyes bugging out, falling backwards, clutching his throat kind of choking; it was just your regular kind, a lot of coughing and huffing and wheezing – and then he spits the bread out.  I was ready though, man, I was ready.  It would have been a pleasure to perform the Heimlich on that man.  Anyways, George gets his voice back and says, ‘Four billion?  For four billion, I’d sell my company, my name, and my private parking space at the mint.  For four billion, you can have my body when I die.  You can take all the brain tissue samples you want, and dump the rest of me in the freezer with Walt.  I’ll even throw in my dogs and all my Linda Ronstadt records. That was billion with a ‘b,’ right?’”

Understandably, Robert Iger was highly pleased with Lucas’ sudden change of heart, according to .   ‘He was absolutely ecstatic.  Although, he was very concerned about one thing.  He kept saying, ‘What about Williams?  Are you sure you can deliver Williams?  We have to get John Williams, or it’s no deal.’ It was obviously a major concern for Mr. Iger.  But George was very cool about it.  He says, ‘Don’t worry, Bob.  I’ll get you Williams.  But I want something else:  Disney takes the 2.5 million units of life-size Jar Jar Binks plush toys off my hands.  The warehouse rates are killing me.’  It was a tense moment.  I thought maybe the whole thing was going to fall apart right then and there.  But they eventually worked it out.  Iger said he knew of either an orphanage in or a militia group in that might take them, and they decided to split the shipping costs 50/50.   I’m not sure if this is public knowledge, but that’s where the .05 in the 4.05 billion came from; Iger added it to the deal to cover his half of the cost of getting rid of all those Jar Jar toys.”

We asked Mr. Gary to describe his reaction to being present for such an historic moment.  You want my reaction?  I’ll tell you my reaction.  My first thought was, ‘Oh sh*t, there goes my chance.’  Poof, gone.  I traded five Fridays for five Tuesday night shifts with Elena Garcia just for the opportunity to pitch my idea to Lucas.  Then, just like that, he goes and sells the whole damn thing.  Oh, it was terrible.  It was like he just yanked that dream right out of my head, threw it down on the ground, and stomped the life right out of it.  But what could I do?  I did the only thing I could:  I went back to the kitchen and brought out the dessert tray.”  When asked why he didn’t just approach Robert Iger instead, Mr. Gary replied emphatically, “No way, man.  Everyone in knows you don’t bother Iger while he’s eating.” 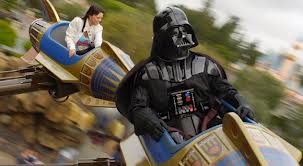 In the week since the announcement, many people connected with Lucasfilm are quietly (very quietly) cheering Disney’s acquisition of the company.  One employee, who requested to remain anonymous, told thunderstrokes, “Nobody’s really willing to say it out loud, but most of us feel that relieving Mr. Lucas of control over Star Wars is like relieving Captain Queeg of command of the Caine:  a sad, but extremely necessary move.”  Whether George was actively frisking Lucasfilm staffers in a single-minded effort to locate the missing strawberries probably will remain a closely guarded secret; but for many, his obsessive tendencies made him a difficult person to work for.  “Personally, I’ll be glad to see him go,” said Will Cresge, whose wife Francine once worked as a personal assistant to Mr. Lucas.  “I can’t tell you how many days my wife would come home from work just miserable, crying like she couldn’t stop.  Once I asked her, ‘Hon, what’s wrong?  Is George forcing you to do something you don’t want to do?” and she said, ‘Yes, but it’s not what you think. George is talking about making another special edition.  He’s been walking around the office for days, muttering ‘So they don’t believe me that Greedo shot first, huh?  Well, I’ll show them.’  He says he’s going to add a CGI banana peel and have Greedo accidentally shoot himself when he slips on it.  I tried talking him out of it, but he won’t listen to reason.  I don’t know how much longer I can take this.’”  Another former employee, Arlene Godinez, tells of an unsavory incident which occurred at the annual Halloween party held at Skywalker Ranch in 2003.  “I brought my son, Tucker, to the party dressed as Wicket, one of the Ewoks.  I must’ve spent eighty hours making his costume.  I wanted it to be perfect.  I only did it in honor of the twentieth anniversary of Return of the Jedi.  I thought he (Lucas) would appreciate it.  But when George saw Tucker standing at his door in his cute little Wicket costume, he just lost it, I mean lost it.  He started screaming, “Why are you tormenting me like this?!  I hate Ewoks!  I never wanted Ewoks!  It was always supposed to be Wookiees!  I hate them! I hate them! I hate them!” and then he started ripping the fur right off my boy’s body.  And my Tucker was so scared, he just stood there, crying, with this brown cloud of fluff raining down around him while George shredded every piece of his costume.” She shudders as if reliving the memory.  “It was a like a hairy version of Carrie.” 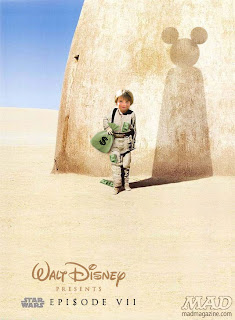 Fan reaction to the news has been far more ambivalent than that of insiders, ranging from feelings of betrayal to enthusiastic support.  On the negative end of the spectrum, Glenn Felzenberger, a 31-year-old from who runs the prominent Star Wars fan fiction blog This Jawa Life said, “It’s simple.  I’ve easily spent over fifty thousand dollars of my mom’s money on Star Wars-related memorabilia over the years, and I was happy to do it because I knew that it was helping make George rich.  Now if I buy something, it’ll just be making some corporate suits at Disney more rich than they already are.  George is an artist, a visionary.  Disney is just a bunch of profit-seeking leeches.  They don’t deserve my mom’s money.”  Mr. Felzenberger has started a petition on his site asking people to buy only pre-2012, Lucasfilm-era Star Wars memorabilia and collectibles.  To date, 3 people have signed it.  Interestingly, Mr. Felzenberger is not one of them.

Of those embracing the move, perhaps no example is as compelling as the recent story in of two rival gangs whose traditional hatred for each other has been completely transformed by the Lucasfilm-Disney union.  “It is true.  Until last Monday’s announcement, we hated them,” declares Takuya Yakasawa, leader of Fo-su Tomodachi Kawaii (lit. “Super Force Friends”), a semi-violent gang comprised of ultra-hardcore Star Wars fans, referring to their rivals, Nezumi Hogosha (lit. Mouse Guardians), a ruthless gang of Disney devotees.  “We had standing orders,” says Keiko Suzuki of Nezumi Hogosha.  “If a member of Fo-su came within our boundaries, we were morally obligated to destroy them utterly.”  They were quick to set aside their differences, however, once news of the merger reached both gangs.  “We are now allies,” reports Mr. Yakasawa.  “We are now full of peace and joy toward Nezumi Hogosha.”  The two rival leaders cemented their new status as allies by having their picture taken on Toyko Disney’s .  In the photo, both can be seen screaming and holding R2-D2 edition Mickey Mouse ears onto their heads. 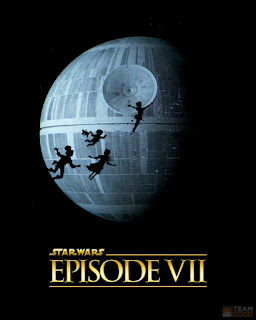 Fans and alike know that the Force was strong with Lucas, but will it be so with Disney?  Fans will probably have to wait until 2015 at the earliest to find out.  Disney is already moving forward with plans to begin production on the long-rumored third trilogy, with Star Wars – Episode VII scheduled to hits theaters that year.  The last word goes to Tucker Godinez, the boy whose Ewok costume Lucas annihilated at his Halloween party.  In spite of the trauma suffered nine years ago, Tucker remains a steadfast fan.  “Star Wars is the best thing ever.  Even if it [the next film] sucks, ten million people will still go see it.  I know I will.  Not in costume, but I will.”
Posted by Kevin Thorson at 9:04 PM