We here at thunderstrokes are big believers in the four R's: recycling, reducing, reusing, and repurposing.

As proof, today we are offering a collection of repurposed pictures featuring recycled celebrities, reusing a traditional comedic device known as inappropriate photo captioning, the results of which have been reduced in scale from monumentally hilarious to merely silly.

The following gallery of celebrity buddy photos all hail from the era of Reagan, Frogger, and Gilbert Gottfried, and were borrowed without permission from The Huffington Post, which really wasn't doing anything with them anyway.

So, here you go, a little feature we're calling...Celebr80's

Read more »
Posted by Kevin Thorson at 10:39 PM No comments: 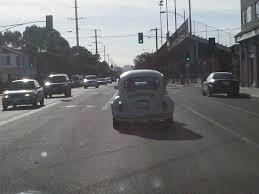 Remember when you were a kid, and you used to play Slug Bug?  You’d be going somewhere in the family car, and you and your siblings or friends would be watching the road like hawks from the back seat.  As soon as you saw a Volkswagen Beetle, you’d lean back and WHAM! let your neighbor have it by punching them in the arm, shoulder, ribs, neck, or wherever you thought you could inflict the most damage (aside from the obvious).  In our family’s version of Slug Bug, if the person made a sound while being hit, you got to hit them again.  I don’t know how many times we’d start a game of Slug Bug, and some time later I would find myself waking up in the waiting room of the local hospital.  Man, little sisters can be vicious.

I don’t know why, but for some reason Slug Bug only worked when you were in a car.  Inside a car, belting someone for being the first to see a Beetle was fine; outside a car, it was considered assault and battery.  I think even the hospital workers understood this.  When they found out that I had been beaten unconscious in the back seat during a game of Slug Bug, they’d just nod knowingly and tear up the child abuse reporting form they were filling out.

Remember how prolific the VW Bug used to be?  Yet, despite the German zest for the, shall we say…autocratic, they were never considered the king of the road.  Despite their lineage, Beetles just weren’t big enough, intimidating enough, or all-around serious enough for that.  No, the Beetle was all about mob rule, but of a decidedly friendly sort.  As a kid, peering out the car window at a cluster of Beetles surrounding you was like being licked to death by a dog; that is, provided there was no one wailing on you mercilessly at the time.

In 1977 Volkswagen stopped selling Beetles in the , and I think the game of Slug Bug gradually went dormant as the vehicles that once swarmed ’s streets, parking lots, and highways slowly dwindled.  Or maybe I just grew out of it.  Hard to know for sure.

Of course, Volkswagen revived the Beetle in the late 90’s, and several years ago, my daughter introduced me to a game she learned from some of her school friends called Buggy Punch.  She patiently explained the rules in the car one day, after suddenly exclaiming “Buggy Punch!” and hitting me on the back of my head.  I listened as though it were all new to me, while simultaneously fighting off panic-filled flashbacks to my childhood.
Read more »
Posted by Kevin Thorson at 11:13 AM No comments: