For those of you out there seeking answers, may I suggest that there are answers, or rather, an answer. 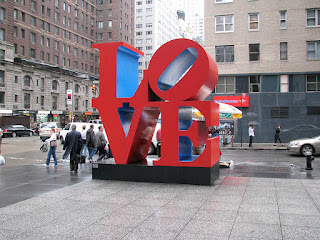 Jesus said it, Shakespeare set rhyme to it, Einstein deduced it, the Beatles sang it, Robert Indiana sculpted it, Dr. King and Gandhi and Mother Teresa fought for it; yet, despite these illustrious and accomplished proponents, each one of us must discover for ourselves that it is the truth, and the answer to everything.

Be advised, however, that knowing the answer is not the same as getting the answer, and knowing only marks your starting point on a new road, not an endpoint.   If you’re like me, what will happen next is that you will realize how perfectly terrible you are at it, and how far you actually are from your destination.

It will probably shock you to know.

On the other hand, if you’re like me, you’ll be thrilled to have found the road at all. 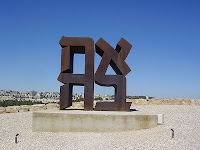 Anyway, here’s where I am now on that road, in exactly fourteen lines…
Read more »
Posted by Kevin Thorson at 12:32 PM 1 comment:

Meeting with The Boss, A Springsteen Odyssey - Song 4 (and a birthday card)

A Springsteen Odyssey is an ambitious effort to tell the story of one Springsteen concert, from one fan's perspective.  What makes it ambitious is that it is twenty-six parts long, one part for each song played by Bruce Springsteen and the E-Street Band that night, with each song helping to tell one part of the story.  Taken as a whole, they provide a comprehensive picture of a fan's relationship to an artist and his music, but each part also stands completely on its own.  This is part 4 of 26.  You can read part 1 here. 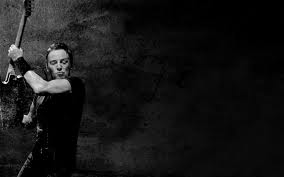 Let’s see, where were we?

I believe we were on our way up at the end of song three.  A quick check of the previous post, and yes, that’s exactly where we were.

All of us in the audience, it seemed, had been caught up in the spontaneous, swelling exuberance of I’m a Rocker.  Coming as it did after a slow start, and a disappointing one for me, the relief I was feeling at that moment was indescribable.

I used to have an old pick-up truck with a clutch that was nearly worn out.  It became progressively harder to get going in the morning, and one day I couldn’t seem to get the truck into gear at all.  I was sitting there, the engine idling, gears spinning incoherently, mashing the stick into the flywheel over and over, and it seemed like no matter how many times I tried, it just wouldn’t catch.  I found myself suddenly wondering if this is it, if my old truck’s finally had it, and what will I do now.  But then the clutch somehow magically did engage.  I could feel the harness slipping once again over the flailing beast of a motor, futile energy channeled into useful power one more time.  I set off for work, sighing with relief, happier in that moment than I ever would have been had the darn truck been working perfectly all along.

I’m guessing that Springsteen felt it too, knew that he had things moving in the right direction, and understood, with a veteran performer’s canniness, not to let the surge falter.  That might be why, while Max Weinberg was still busy splashing around on the cymbals during the song’s finale, The Boss began counting out “One..two..,” forcing Weinberg to rapidly alter direction in mid-splash.  Even so, he was able to pick up the count before Springsteen could get to ‘three,’ and belted out five big, staccato beats.  Then he held up momentarily, letting silence fill the next two counts, creating an instant, electric anticipation in the crowd, like the one that comes during a fireworks display, each time there’s that long, expectant moment of silence between the fizzle of the rocket’s fire-trail and the booming blossom of color in the sky.

In this case, though, the pause was broken by a prancing piano jangle synchronized to the deep Bahm..Bahm, bah-bah-Bahm..Bahm, of the saxophone.  Recognition flashed through the arena, and the audience roared out in spontaneous reaction.
Read more »
Posted by Kevin Thorson at 12:29 PM No comments: