Manifesting the past by destroying it

Last week, in a small town in , a former Nazi leader’s bones were dug up, removed from the grave and burned to ashes, which were then scattered at sea, a very popular interment choice these days.  Seems like a lot of trouble to go through for someone who’s been dead for 24 years.  The long-deceased Nazi was named Rudolph Hess, and apparently the man was a top leader in the early years of the Third Reich.  In fact, it is reported that Hess is the man to whom Hitler dictated much of his Mein Kampf manifesto while in prison.  And by the way, is it some kind of law that we have to refer to it as ‘Hitler’s Mein Kampf manifesto?’ Is manifesto Latin for ‘lame, boring piece of crap?’ Moreover, how is that for a claim to fame?  “Yavoll, my name is Rudolph Hess, and I took dictation from ze great Adolf Hitler.” Big deal, so did about 6 million Jews.

When Hess died in 1987 at the age of 93, he was buried in the family plot in .  The cause of death: he hanged himself.  At 93 years of age.  That’s like being in a restaurant and telling the waiter you’re extremely dissatisfied with the food they brought you, but then eating everything except the last bite before sending it back. Who does that, unless they’re Jewish?  Hey, wait a minute . . . Are you sure you’re Aryan cred’s in order, Herr Hess? Papers, please.

In the years since his burial, the grave has become a rallying spot for Neo-Nazis who see him as a martyr. Why? My personal guess is that it’s for having the balls to off himself at 93.  The family, church, and town, understandably uptight, used the opportunity presented by a lease renewal on the grave site to conduct their brash, flash, dig’n’dash, burn to ash, final splash rehash operation.

I completely understand why the town wanted to rid itself of this pestilence.  Who wants a bunch of swastika-wielding kooks, sieg-heiling each other’s Fuhrer tats and goose-stepping all over the azaleas?  No decent person would want to be around that kind of nonsense, and I’m sure Wunseidel is loaded with decent people.  However, it rasies a troubling question:  can you really expect to preserve the present by destroying the remains of the past, or do you only assure yourself a more dangerous future?

Look, we did the same thing preventatively with bin Laden because we didn’t want radical, militant Muslims having a place to picnic.  But just because we denied them the tables, and the trees, and an open space to play ‘Frolf,’ does that mean they won’t find another park?  Does not having a naturally-occurring rallying place mean they can’t rally?  Or does it mean that we just can’t see them when they are rallying, in whatever form or whatever place that may be?  In other words, is such an action meant primarily to confound the enemy, or is it to feed into our own need for a false sense of security?  If we can’t see it happening, then it must not be happening, our simple minds tell us, especially when that’s exactly what we want to believe.

I’d much rather see the enemy rallying out in the open, whether it’s Wunseidel or .  Call me crazy, but I’d actually like to know if there are people out there plotting for my destruction, and not just if, but how many, and what kind of shoes they’re wearing.  No, I’m serious, shoes are important.  If they’ve got sneakers on, they may be going for a jog after the rally.  If they’re wearing dress shoes, they’re probably planning on a nice dinner, maybe at the club.  But if they’re wearing combat boots . . . well, I'm willing to bet they’re not going out for Frappucinos or Dilly Bars afterwards.  It might be time to start thinking about doing something.  These are diseased people; they are a human cancer. Just like cancer, they don’t announce themselves when they first arrive, and they spread below the surface.  They will go as far as they can, and they will eventually kill.  Why would we want to play to all of their strengths?  Imagine hearing this from a doctor: “Well, Jim, the test results are in, and it’s been confirmed: you have cancer.  I advise we wait awhile and see where it goes from here.”  How would you like to be that doctor’s insurance company?

Look, I don’t know if the citizens of Wunseidel were right or wrong to deposit Hess’s ashes at sea, and I don’t know if it was right or wrong that we did the same with bin Laden’s body.  I just know that I prefer the bitter taste of hard truth to the easy-to-swallow caplet form, and I feel like all I’m getting these days are caplets.  I know they’re supposed to work just as well, but since you can’t taste the medicine, you have to trust you’re getting what you asked for.  Plus, there’s no way to tell what’s really in them until that future point in time when the effects manifest (or is that manifesto?) themselves.

Below is the AP photo which accompanied the article in the .  I love how they felt it necessary in the caption to identify Hitler as “left,” as if there might be some confusion about who’s who in this picture.  Wait, you mean that man standing above everyone else with his arm straight out is Hitler? That man wearing the thin leather sash and his hand on his buckle? You mean that guy with the short, straight black hair and the widow’s peak that goes all the way to the Sudetenland, AND THE HITLER MOUSTACHE; you’re telling me that’s Hitler?!! I’ll be darned.

Also, isn’t it strange that Hitler actually had six fingers on his left hand? 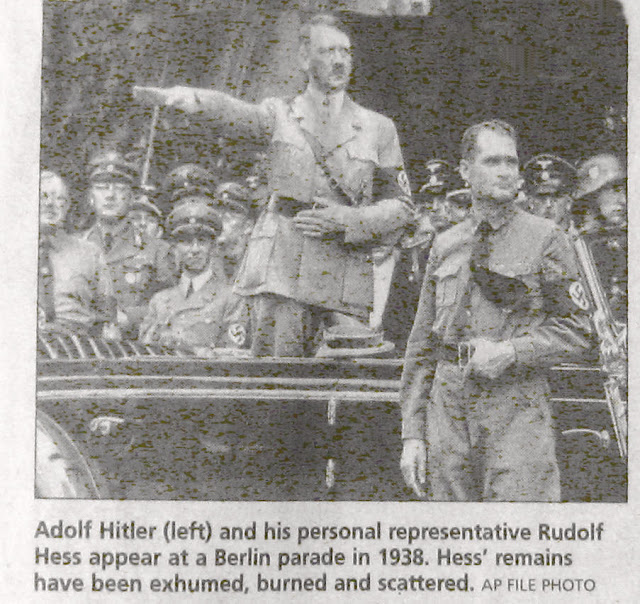 Ha! Made you look.

Posted by Kevin Thorson at 5:12 AM