Goodbye to a Good Man 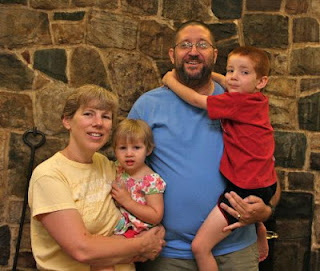 For those of you who met Kent Yoder through the guest post I published here back in June, I have the difficult task of informing you that died on October 27th, 2012.

He battled prostate cancer for more than a year before the disease vanquished his body, and in doing so, freed him from his body’s terrible confinement.

was 49.  He had been married to Janelle for eleven years, and in that time fathered a son and a daughter.  As I trust in God’s grace, they will all live on and do amazing things.

I last saw the weekend before he passed.  I went along with our friend Rick to see him in a hospice facility.  We spent some time with Kent, and Janelle, and a few others who came through to see him.  He looked nothing like the of just a few short months before, which was nothing like the of a short year before that.  His body looked like that of a concentration camp victim.  He had that same ageless, ancient look that I remember from photos I would show my sophomores each year when we read Elie Weisel’s Night together.  As with them, it appeared that it was only the spirit of the man inside that prolonged the life of his body, and prevented it from crumbling to dust on the spot.

I took a copy of the Bible, and a collection of Gary Larson’s Far Side cartoons with me when we went to visit him.  If that seems like a strange combination to bring to a dying man, well it just felt right, knowing to the extent I do.  Inside the Far Side book I tucked a copy of the lyrics to Bridge Over Troubled Waters.  I don’t know why.  I guess I was just thinking about what might comfort me, if it were me instead of him.

Elizabeth and I attended ’s memorial service in November.  It was held at the Mennonite church barely a mile away from our house.  I will always remember the beauty of the music that day, especially the heavenly harmonies of the congregation.  I wish Catholics learned to sing in harmony like that.  At least I would know how to sing.  The church hosted a luncheon after, with taco salad and some chocolate snickerdoodles (called Volcanoes, I think) from Chino Bandido, one of ’s favorites.  It was an especially cold day for November in , but with a sky so blue that, like the sun, it hurt the eyes to look at it straight on.

The next day, at our church, one of the songs played during the service was Bridge Over Troubled Waters.  In the two years that we’ve been attending services there, I haven’t heard them play that song before.  I don’t know why things like that happen, or if they’re supposed to mean anything.  It did bring tears to my eyes, though, and I took it for one more example of serendipity, although serendipitious of what I really couldn’t say.

Just a few weeks ago, Elizabeth and I attended Rick and Karri’s white elephant party, which is held annually on the first Saturday of December.  It was the first without in a long, long while.  The composition of the group has changed over time to reflect new friends and work acquaintances, and so Kent and I, being old-timers (as well as having worked together for a short time at the post office), tended to spend much of the party in recent years around each other, entertaining each other with timely quips and sarcastic asides.

It’s taken me awhile to write this, and it is obviously belated.  I knew I needed to say something (having introduced him to you previously, it wouldn’t have been right to allow his passing to go unnoted here), but I didn’t know what, or how much, I wanted to say about him, or about my feelings.  I think I needed to process for awhile, as I seem to need to process most things: the more personal, the more processing, the more time.  I’m sorry if it seems uncouthly after the fact.

I wrote a poem, which I’ll post separately.  It’s called “December Wind.”  The poem started out as a counter-Christmas song, a song for people who aren’t made happy by the holiday season.  Since I love to play against type, the idea of a Christmas song about being cold and lonely really appealed to me.  When I sat down to write it yesterday, though, it quickly transformed from a song to a poem.  And instead of being centered on the holiday season per se, it revolves around the last month of the year as a metaphor for death.  And while I didn’t consciously intend the poem to be about physical death, there was a point as I was writing when I realized that was in this poem with me, or at least some of my ideas about him and his death.  I won’t go any further than that, since to do so without the poem as a reference makes little sense.   I just wanted to mention the fact that the poem somehow ended up incorporating to some extent in the final result.

was a good man, and he will be missed, and remembered.  According to his CaringBridge page, he has asked that those wishing to do something to remember him donate to a group called House of Refuge.  If you feel led to do so, I’m sure they (and Kent) will be most appreciative.