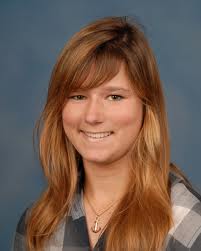 Brittany Wenger is seventeen.  She lives in where she’s a senior in high school.

Remember senior year in high school?  That’s the year you worked really hard to do just enough to graduate while sneaking out with your friends as much as possible.  Your parents and teachers had a name for this, remember?  They called it ‘senioritis,’ and usually the only effective way to treat the symptoms was with the repeated threat of yet another year in high school.

For all I know, Brittany Wenger is just like any other high school senior in that regard.  But I do know at least one thing that distinguishes her from everyone else in high school, and I’m talking the history of high school.  Ms. Wenger has invented a neural network that allows breast cancer tissue samples to be analyzed with more than 99% accuracy.  She taught herself artificial intelligence programming so she could create her own neural network, and then learned everything she needed to know about how breast cancer is diagnosed from tissue samples so she could then ‘teach’ the computer program to sort through all the data and reach an accurate conclusion more than 99 times out of 100.

And I thought I was a genius when I figured out how to replace the rubber flush-flapper thingy in our toilet last week.

It’s true, though.  She did just that.  The seventeen-year-old found a way to make the most minimally invasive breast cancer detection procedure, called fine needle aspirate, almost 100% effective, where it had traditionally been among the least. 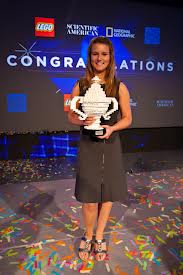 I may not be a genius (see above), but to me this is Nobel Prize-caliber stuff.  Whether or not the folks in agree and are currently engraving anything with her name on it I have no idea; but she did recently win the grand prize, including a $50,000 college scholarship, an internship opportunity, and an award made entirely of Legos in the 2nd annual Google Science Fair.

Even though the contest was held last month, I only discovered Ms. Wenger’s achievement by accident earlier this week.  And that, in itself, raises a point.  How is it that this story isn’t plastered across newspapers, blared from TV sets, and heralded on credible news websites all over the country?  Fer cryin’ out loud, Google is one of the icons of the information age, and on top of that, they sponsored the contest, yet I still had to google ‘google science fair’ to find the actual site.  Seems to me they could have at least created one of those cute, customized Google logos they like to do to publicize the event.

I feel like we should be giving this kid a parade.  Seriously, is there anybody here who hasn’t lost someone or know someone who has had to battle for their life with breast cancer?    Shouldn’t we be showering this brilliant young woman with public appreciation for her accomplishment?  Shouldn’t she be in a commercial where they show her being hoisted into the air by a legion of ecstatic fans while an announcer says, “Brittany Wenger, you just invented a neural network that diagnoses breast cancer with more than 99 percent accuracy, which could help save thousands of women’s lives every year.  What are you going to do now?” And she responds excitedly:  “I’m going to the !”  Which she is (it was another one of the prizes for winning the Google Science Fair).

What is wrong with us that a seventeen-year-old girl can do something like this, and it gets no reaction?  Aren’t we the least bit worried we might be sending the wrong message here?  Have we really reached the point where, unless you’re an impossibly cute Disney channel star, a boob-jobbed and belly-shirted reality show sensation, or former teenage celebrity engaging in bad behavior, you don’t even make the cultural radar?  Do we really want to teach our girls that to receive attention they have to rely solely on the laws of physical attraction?

As the father of two daughters, I can only hope that’s not the case.  I want them to live in a world where girls and women are recognized for the fullness of who they are, for their amazing intelligence, and all of their gifts and beauty, and not just the disproportionately large, shiny parts you see on some lonely trucker’s mudflaps.

For that reason, I would like to say thank you, Ms. Wenger, for doing something completely rock-star awesome with yourself.  In return, I solemnly promise not to make my children hate you by bludgeoning them unrelentingly with your example.

I read several brief interviews with her, and a few of Ms. Wenger’s comments really stood out.   In an article by John Roach on NBCNews.com, she said something that really smacked me bum good.  “I came across artificial intelligence and was just enthralled. I went home the next day and bought a programming book and decided that was what I was going to teach myself to do.”  What an amazing and, might I add, completely childish (though I mean that in the best possible way) thing to say.

Think about it.  What ‘adult’ would say such a thing?  Oh, we might be just as enthralled as Ms. Wenger was by a subject like artificial intelligence (I said might), but how many of us would ever say, “…so I decided to teach myself how to do it?”  See, we adults know too much.  We know that you just don’t teach yourself how to program a computer with artificial intelligence.  You have to take classes if you want to be able to do that.  You’ve got to get your bachelor’s in Computer Science, then a Master’s in Advanced Computing Theory, and a Ph.D. in Super-Duper-Uper Computing.  Then you’ve got to go to all the latest artificial intelligence conferences, and workshops with names like “The Startling Implications Of Cloud Computing On The Next Generation Of Neural Networks,” and seminars like “How To Teach A Computer To Think Without Giving It Any Ideas About Taking Over The World.”

And when a kid comes along and says something like this to a grown-up, what is our initial response?  After laughing in their faces, that is?  “Well, someone’s got a lot to learn about how things work in the real world.”  And we say it like we know what we’re talking about.  And then we tell them about all the classes and the degrees and the years of studying it takes to even sniff something as complex as artificial intelligence.

Except they don’t listen to us, do they?  Maybe it’s because they’re bored, or impatient. Who knows?  They just get started, and then try to figure it out as they go.  The arrogance of youth.

Thank God for it.

Sometimes I think it’s the grown-ups who really have the artificial intelligence.

In another interview, this one with Mike Cassidy of Silicon Valley MercuryNews.com, Brittany explained the solution to getting kids, any kids, more interested in learning science.  The key thing, she says, is to let kids discover their interests. “You can really see how science does have the potential to revolutionize the world,” she says. “If kids are exposed, they are more likely to find their true passion, to be able to do whatever they want with science, rather than being forced into it.”

I think we all recognize the truth in that statement. Hey, for me as a kid, it was dinosaurs and astronomy.  Anything having to do with either of those subjects was inherently fascinating to me.  On the other hand, I really disliked math.  But if, instead of asking me “what is 64 divided by 8,” my teacher said, “if there are 64 Protoceratops eggs spread equally in 8 nests in a colony, how many eggs are in each one?”  I would have had the answer in a snap.  Want to move on to fractions?  Fine.  Just throw in something like, “Suppose a pack of 12 Ornithomimuses invaded the Protoceratops colony, and each Ornithomimus ate 3 eggs.  How many eggs survived the incursion, expressed as a fraction?” Percentages?  “Here’s the mass of each planet in our solar system and the corresponding weight of a man standing on each one.  Express the man’s relative weight on each planet as a percentage of his normal Earth weight.”  I not only would have found the answers to the fifth decimal point, I would have gone on to find out how many cheeseburgers the man on earth would have to eat to reach his relative weight on Jupiter.  I’m absolutely convinced I could have taken college-level calculus in high school if only it had included enough Ankylosauruses and Parasaurolophuses.

But we all know that that’s just not the way education in this country works.  Expressed succinctly, if you want to learn your elementary school math, you better like fruit.  And as far as “letting kids do whatever they want with science” goes, we all know that’s not happening.  Sometimes, though, with good reason.  Did I ever tell the story about the kid who did whatever he wanted with science, and promptly blew up our high school chemistry room?

But I do believe her larger point is valid, and that the way to get students interested in science is by tapping into their existing passions, and exposing them to a wide variety of things to help them discover new ones.  I know this sounds crazy, but the funny thing about learning is that people naturally want to know more about things they’re interested in.  And the advantage science has is that there’s a branch of it for just about everything.

Why disregard all those untapped reservoirs of passion?

There is no question that we have to change the way we approach education if we want to truly transform all of our students into passionate learners, whether it’s science, math, or whatever.  We have to find out what gets each kid excited, and leverage that natural passion into learning.  Think how many physics lessons could be derived from skateboarding, and how much logic and math could be taught with video game design.  We finally have the technology and access to the vast amounts of information necessary to reach kids wherever they can be reached.  Shame on us if, in spite of this, we decide to keep education moving along its same old, inefficient, rickety mass production line just because that’s what we know and are comfortable with.

Turns out Ms. Wenger has given us a lot to think about, above and beyond her mere achievement of improving the accuracy of breast cancer diagnostics.   By the way, if you want to know more about that, I encourage you to visit the Google Science Fair website and check out her slide show presentation explaining how she did what she did.  I predict you will be impressed and inspired by what you see. 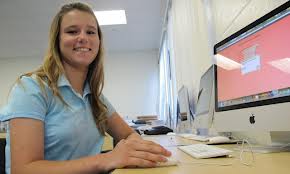 Seriously, though, watch out for that whole senioritis thing.  It has this much in common with breast cancer: it can infect the best of us.  Listen, I’m sure you’re very busy now, but if you could solve that one, you’d have a million grateful parents, each of whom would gladly do all your laundry while you’re in college.  I know it’s not a trip to the Galapagos, or a trophy made of Legos, but still, give it some thought, okay?

Posted by Kevin Thorson at 7:05 AM