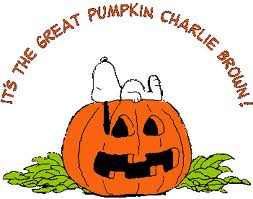 It’s the Great Pumpkin, Charlie Brown was in heavy DVR rotation at our house over the last week or so.  It turned out that there were several other ways it connected to our Halloween this year:

Inspired by the TV special, my ten-year-old daughter Jessica decided to be a “Charlie Brown ghost” for Halloween this year.  We bought a white sheet and a yard of black fabric.  With some scissors and a glue gun, we did our best to recreate poor old Charlie Brown’s infamous costume. It cost a total of $16 bucks to make, and that’s only because we didn’t have a white bedsheet lying around the house.  Here is how it turned out:

Not bad, right?  By the way, all modesty aside, I have the coolest daughter in the world.

I have to admit I’m more than a little proud that my daughter chose to be a Charlie Brown ghost.  She could have opted to be a vampire stewardess, or a zombie cheerleader, or Lindsay Lohan. It gives me a modicum of hope for the future.
At ten years old, she’s probably close to that age where it would be easy to start looking around at what other girls her age are dressing up as, and to consciously or unconsciously begin conforming to what others want or expect.  The fact that she chose to dress up as a Charlie Brown ghost is a clue to me that as of yet, her dreams are still her own, and the sacred, magical independence of childhood imagination still exists in her.  As I’m sure you can imagine, we encountered no other Charlie Brown ghosts in any of our Halloween rounds over the weekend.  It is a reason for giving thanks, even as I bemoan the inevitable demise of that innocence.

If only there were a way to ensure its survival, to prevent its contamination from the forces of commercial cynicism and the peer pressure of those who have already been brought down to earth by cold-hearted and heavy-handed “reality.”
Not that she wasn’t a little miffed when people didn’t get her costume and thought she was dressed up as a dalmation, or a cow, or our personal favorite, the ghost of a cow.  One person I happened to ask while we were out trick-or-treating took a long look at her costume and surmised that she must be a chocolate-chip-cookie ghost.  I’m not sure, but he may have been stoned.  At any rate, let the heathen have their misconceptions.  I love it that she didn’t go for the obvious, or the faddishly popular.  I love that she was brave enough to do what she wanted to do, and had the strength to be different.  You rock, girl!

By the way, is it possible that Peanuts is gradually returning to its counter-culture roots?
Judging by the number of people who were either confused by, or oblivious to, what Jessica’s costume was meant to represent, I’d say that one of the great cultural touchstones of our lifetimes may be losing its dominant grip on the collective consciousness. Nothing would make me happier than to see Peanuts return to its true purpose as being the funniest condemnation of human nature ever, and not the stuff of greeting cards and blimps.

And then there’s Maria. 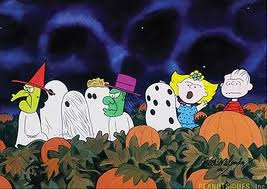 As mentioned, the girls watched the “Great Pumpkin” TV special multiple times in the days leading up to Halloween weekend.  There was one scene in the show where the gang is out trick-or-treating while Linus and Sally sit in the pumpkin patch, awaiting the arrival of the Great Pumpkin.  As the trick-or-treaters hold out their bags to receive their Halloween candy, Lucy says, “Could I have an extra piece of candy for my stupid brother?  He couldn’t come with us because he’s out sitting in a pumpkin patch, waiting for the Great Pumpkin.” Remember that?  Alright, hold that thought.

So we took the girls to a Halloween carnival at Unity on Friday night.  We weren’t sure how Maria was going to react to all of the spooky decorations and costumes, since she had just gotten over being terrified by the sight of Jessica putting on the Charlie Brown bedsheet.  And while she was reluctant at first, once she realized that people were giving out candy for playing the games, her inhibitions quickly disappeared.  At the second game, after throwing a plastic ring somewhere near the target, the woman rewarded her precision with some candy.  As the last piece plunked in her little jack-o-lantern bucket, Maria, with total sincerity, looked her right in the eye and said, “Could I have some more candy for my stupid sister?”  The woman was clearly taken aback, and I had to prevent her from actually giving Maria more candy while hastily trying to explain that she was merely repeating what she saw on a TV show.

I have to admit that afterwards, I began to wonder if she really was just innocently repeating lines from the show, or if she was purposely trying to score more candy for herself, and willing to use her sister to do it.  It’s the kind of thing Lucy would do, after all.  If you remember, we never do see Lucy giving any of that ‘extra’ candy to her brother, do we?

Sometimes my daughter frightens me.

If you’re wondering what costume Maria wore for Halloween this year, she was Snow White for a couple of things, including trick-or-treating Monday night, and she was Dorothy from The Wizard of Oz for a party on Saturday.  Here are a few pics:

Prior to these, she wanted to dress up as a dragon, and before that, a stormtrooper (Star Wars, not Nazi).  She briefly became obsessed with Star Wars when she happened to notice me playing a game on the Star Wars website.  She somehow became both simultaneously smitten and frightened by Darth Vader, and only wanted to see clips of him from the movies, which we watched over and over.  She especially loved the one where Darth and Luke have their light-saber battle at the end of The Empire Strikes Back.  I found it disturbing that she was clearly backing Vader.  She even asked me if we could throw Darth a birthday party.  When I did my imitation of Darth Vader breathing, she would become momentarily excited, but then get scared and make me stop.

Her preoccupation with the Sith Lord and with stormtroopers generally had me saying what it seems like every character in a Star Wars movie has said at one time or another:  “I’ve got a bad feeling about this.”  I’m hoping her intense interest in the bad guys is not a predictor of her future preferences in a date.  What’s worse, I don’t know if I should be more concerned by the fact that she appears to be attracted to evildoers, or that I’m not even sure if she even realizes that underneath the armor, there are humans in there.  Or if she even cares.

For that reason, let this be broadcast throughout this galaxy and any other galaxies far, far away:  I have a Death Star, and I’m not afraid to use it.  Just ask my sisters.

One last thing…
Can someone please tell me what’s going on with the size of the Halloween candy?  It has to be shrinking, because I’m reasonably certain my hands and mouth did not grow over the last year.  We bought our candy at Costco, the big mixed bags of chocolate candy, just like we do every year.  You may have done something similar.  Did you see the size of this year’s Milky Way?  It was half as tall as last year, and barely had any fluffy nougat inside.  Do they think we don’t notice these things?  And where did the 3 Musketeers go?  We had Snickers, and Milky Way, but not even 1 or 2 Musketeers, let alone 3. Did the Musketeers secretly change their motto to “All for none, and none for all?”

And then there were the Peanut M&M’s.  In our mixed bag of candy, we had a sealed packet of Peanut M&M’s that only had one Peanut M&M in it.  One single candy-coated peanut.  I’m not kidding; I’ve got the package right here in front of me.  And they still had the audacity to call it “Fun Size.” Fun.  Right.  Maybe if you’re Ebenezer Scrooge it’s fun to give out packets of single M&M’s.  Fortunately we caught it before it was deposited into someone’s trick-or-treat bag.  That could have been enough to get our house egged and/or TP’d.  If I got something like that as a trick-or-treater, I’d feel ethically compelled to retaliate.  If you’re one of those people who had to pick toilet paper out of your elm trees Tuesday morning, or scrub hardened egg yolk off of your bricks, and for the life of you, you can’t figure out why you were targeted, it may not have been anything you did other than buying your Halloween candy at Costco.

I suppose you could make the argument that the bigwig Candymen are really just looking out for our best interests by reducing Halloween treats to a size which must be viewed under an electron microscope to be clearly seen.  I’m sure they’d be quick to point out that there’s no way you could ever hope to hide a needle in Milky Way now, or slip a razor blade into a Hershey’s.  Thanks, Candymen, for saving us from a virtually non-existent threat.  We really owe you one.  Tell you what, why don’t you charge us more for the new, teensy treats you put in packages that you make look exactly the same as the old ones? What, you’ve already done that?  That’s why I love you, Candyman.  You’ve taken all the guesswork out of ripping us off.

I say we get the Occupy Wall Street people involved.  This is clearly an injustice perpetrated by money-swilling capitalist swine, looking to snort up the last particle of profit from the already lucrative candy market.  Hey, give the banks their billions, let the government slide when they authorize the largest transfer of wealth away from its citizens and into the hands of the top 1%, but when you start @#$%!*ing with my Halloween candy, Mister, you’ve bought yourself a one-way ticket to Angrytown, you greedy sons of bitches.