For those of you who have gotten caught up in the ’s Candy Smackdown Madness (and from the looks of it, that’s about 5 of you), I just wanted to post the final results, and see how my skills as a candy competition prognosticator stack up.  I will tell you that things did not go according to plan.  My plan, anyway.

In the Vampire regional, I had Peanut M&M’s advancing over Nestle Crunch.

In the Mummy regional, I had Butterfinger giving ‘the finger’ (couldn’t resist) to the Heath Bar.

In the Ghost regional, I had Twix beating Take 5.

Actual voting result:  Hershey chocolate bar over Kit Kat*
*Twix lost to Kit Kat in the first round. Anyone who read my initial bracketology report knows how strongly I feel about that match-up in the first round.  Kit Kat derailed Twix, and from that point on, this bracket was a complete disaster for me.

In the Witch regional, I had Milky Way advancing over Hershey’s Kisses.

Actual voting result:  Hershey Bar beat Milky Way*
* Hershey Bar and Hershey’s Kisses were also matched up in the first round, and I went with the Kisses, because as everyone knows, Kisses are cuter.

In the semi’s, I had Butterfinger beating Peanut M&M’s.

Actual voting result:  Nestle Crunch pulls an inexplicable upset in my opinion, and takes out Butterfinger.  Nestle Crunch must be like the Yao Ming of candy.

On the other side of the bracket, I had Twix taking out Milky Way.  Neither of these two made it to the semi’s in the actual voting.

Actual voting result:  Hershey’s trounces Kit Kat.  Plain chocolate over chocolate-covered wafers? Something smells rotten in , or at least in

I had chosen Butterfinger to walk away with the title this year by beating the high-fructose corn syrup out of Twix, but in the actual voting, it was the classic American Hershey Bar triumphing over the French forces of Nestle Crunch.  Sounds logical when you put it that way. See the final results.  See the complete brackets. 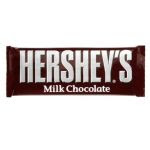 I never would have guessed that the plain old chocolate Hershey Bar would win it all.

As candy bracketologists go, I suck.  However, it figures that in , with candy as with just about everything else, I oppose the majority.

Just as in any other high-paying sports career, there is no off-season anymore for the professional candy bracketologist.  It’s time to begin scouting and analyzing as many candy varieties as I can in preparation for next year’s contest.

Good thing Halloween is just around the corner, and I have two young slaves minions interns to collect many samples for me.  If you happen to see a couple of kids still wandering from door to door around midnight on Halloween, they’re probably mine.  Research, you know.
Posted by Kevin Thorson at 8:31 AM