As a kid, my folks stopped to see the Fountain Hills fountain once on a trip to Payson. It was the middle of the afternoon, in the middle of summer.  The first time I saw the fountain go off, shooting water so high into the sky I couldn’t look all the way up to the top without sneezing, I thought they had discovered an ingenious new way to keep cool.  Maybe it was some great new form of evaporative cooler, one that worked by chilling the air around an entire town with one giant column of water.  It was exciting.  I dreamed that I was seeing the future, and that someday every town would have a giant fountain like this, and kids would finally be able to play outside all summer long.  But then, after a few minutes spent on the sizzling concrete at the edge of the man-made lake, and still feeling every single one of the 113 degrees it must have been that day, I realized that, as far as providing relief was concerned, the fountain was an abject failure.  My short-lived dream was dashed.  I returned to the car, which my mom had never left, and watched the fountain finish in air-conditioned comfort.

Yes, I was disillusioned at an early age by the Fountain Hills fountain, and my animosity has only grown with the years. 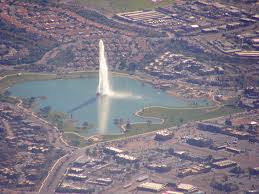 People have tried to tell me that the Fountain Hills fountain is a landmark.  People see that fountain from miles away, they contend, and so they know exactly where they are.  To which I say: Really? What good is a landmark that only appears for five or ten minutes every hour?  Is this the sort of thing we should trust our navigation to?  I’m fairly sure that commercial airliners don’t rely on a once-in-a-while plume of water to find their way safely home.   I did have to agree on one thing, though.  The fountain does tell you exactly where you are; when you see that fountain you know with absolute certainty that you’re thirty minutes away from .  Aside from that, though, I can’t see their point.

The business leaders in Fountain Hills like the fountain.  They say it boosts business.  I say, if it’s so good for business, why are the city’s residents being asked to shoulder the two million dollars needed for essential repairs, and pay almost $150,000 a year for the electricity to operate the thing for a few minutes every hour?  If the fountain really packs in the tourists like they say, why don’t those businesses come together and provide the necessary money?  Then they could run it as much as they want, maybe even all the time, and it really could be a landmark.

What’s that?  Oh, I see, it’s not that good for business…

Perhaps they’re somewhat overstating the economic impact of the fountain.  Look, I’ve been living here since 1979, and in all that time I’ve been to the fountain exactly twice.  And the only time we have ever spent money in Fountain Hills has been at the McDonalds on Shea, right there by the Beeline highway.  Now that was a smart business decision.

Let’s face it:  only in would we think that people will come from far and wide to see water spew into up into the sky and then watch it come down again.  There’s a reason why competitive fountain-building is such a lonely sport.  It’s because no one else cares.  It’s water.  For most places, water is as common as clouds, or wet sidewalks.  Trust me, nobody’s sitting in a café in , , or , talking with a friend about how they just have to get out to to see the most excessive display of needless water propulsion in the country.


Once, I thought the town might be trying to pull a fast one, trick people into making them think that Fountain Hills is a more appealing place to visit because it has a higher rainfall average than the rest of the Valley.  However, my concerns were quickly allayed by the National Weather Service, who informed me that ‘fountain spray’ does not count officially towards precipitation totals.

And then there’s the smell.  Apparently, it can be pretty bad; in fact, several times a day in Fountain Hills I understand there’s a sudden spike in 911 calls reporting a massive gas line break, or an overturned tractor-trailer spilling a load of liquid sulphur.   Personally, I haven’t encountered the rotten egg smell that they say emanates from the fountain.  At least I don’t think I have.  See, we live way over on the west side.  Whenever we get hit with the smell of bad eggs, we just assume it’s coming from the capitol.

But the biggest reason I am opposed to the Fountain Hills fountain is because it’s stupid.
That may not win me any debate points, but it is true.
I don’t know if anyone else has noticed, but we live in an area where water isn’t exactly plentiful.  Contrary to popular belief, the streets here are not paved with water.  And the idea that a town would decide to draw attention to its rather precarious and unlikely existence in the desert by building the world’s largest blown sprinkler head just strikes me as a little too… well, .  I’m sorry; I shouldn’t say that.  It doesn’t even come close to that level of hypocrisy.  It’s more like Laughlin.

Let’s not forget, people, we live in a desert.  People can actually die if they don’t have water.  It’s true; look it up.  And our state has traditionally taken water seriously.  In fact, in 1934, Governor Moeur sent a hundred Arizona National Guard troops to the border, and it wasn’t the one with .  No, he sent them to the Colorado River, with machine guns and live ammo, to stop from continuing its illegal water predations, in this case by beginning to build Parker Dam.  It was serious stuff, especially for those poor construction workers left hanging from the girders by their less-than-stout-hearted coworkers in the ensuing panic.  Do you think those soldiers who were out there risking their lives (or at least a severe case of sunburn) for this state’s future would be especially pleased to find out what the town of Hills ultimately decided was a judicious use of water?

Look, Fountain Hills, it’s time for a change.  If you’re determined to be famous, don’t make it for the wrong reasons.  Don’t make it about the western hemisphere’s tallest and most useless display of water.  Be known for something positive.  Build the world’s biggest Ding-Dong (wait, scratch that, the chocolate would never make it past February; better make it a Twinkie), or drain the lake and turn the whole thing into the world’s most totally radical skateboard park. 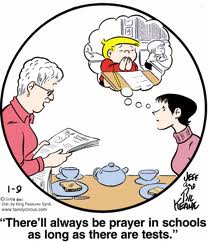 Or better yet, keep the fountain, but change it so that instead of insanely blowing our most precious commodity sky-high, it shoots out a continual stream of classic Bil Keane Family Circus cartoons; or, if you need to scale it back for financial reasons, the old ballots of everybody who voted for Barry Goldwater for President.  That would get some attention for the right reasons.  Plus, you wouldn’t even have to change your name.  Unless you wanted to.

But, please, let’s use this opportunity to stop flipping off Nature with a 300-foot bird, and let’s treat with a little more respect the one thing we desert rats can’t afford to waste:  water.

Posted by Kevin Thorson at 3:36 PM