It’s Wednesday morning, and we’re running late.  I’ve got about five minutes to get Maria dressed, brush her hair, and get her to preschool.  Luckily, the school is only four blocks away, and it is preschool after all, not a job interview; but still, I don’t want her to be late.

By the time we rush out the door, I have one minute to get her to school.  With an automatic expertise born of endless repetition, I click her into her car seat, close the door, and hustle around the back of the car.  As I whip by the plants that line the side of the carport, I happen to notice a strange, dark spot on one of the white lily blossoms.  By the time the blot has registered in my mind, I have already opened my door and lifted one leg to step in.  I stop in mid-motion.

What was that black thing on the lilies?  To ask a question like that, in a situation like that, is one of the things that makes me me.  Another is my inability to ignore the question.

In spite of the pressure to get Maria to school, I step back, leaving the car door open while I take a look.  It was probably just a bit of trash that the wind lodged there, or a piece of foliage burnt to a crisp by the wicked sun.  But I have to verify; my innate curiosity has been aroused.

I back up until I can clearly see the stunted white flowers of the lilies, which have sprung up unexpectedly because of all the recent rain.  The blossoms are anemic and tightly bunched; they look like small groups of geese being throttled, bills open, heads lolling.  On one of these flowers is a bug.  It’s a pretty big bug, easily the size of a thumbnail. Its body is elongated and flat, its head small and black.  Legs jutted up and away from the body before angling acutely down at the joint, reminiscent of a spider.  They are streaked with bright yellow and red.  The colors are striking, and for some reason the yellow, red and black pattern has a streamlined quality to it that reminds me of a football uniform.  And not a bad-looking one at that. 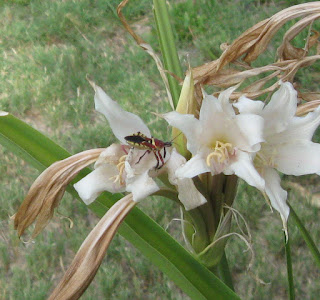 I have never seen a bug like this before, and I’m the kind of person who keeps track of these things.  I get excited.  I immediately come to grips with the fact that Maria will be late to school; nothing matters more at that moment but getting a picture of this exotic-looking insect.  I hurry back into the house, where is in the kitchen, watching me quizzically as I pass through the dining room.  “What’s wrong?” she asks, but I don’t stop to explain.  I just say, “Need a camera,” and then grab one from the desk and rush straight back out the door.  I snap a few quick pictures of the bug, which hasn’t moved, then hop in the car and zoom off to school with Maria.  I’m hoping the creature will still be there when I get back, so I can take more carefully composed pictures.

Yes, I am one of those people who takes pictures of weird-looking bugs.  Now you know this about me.  It was bound to come out sooner or later.  I’ve been taking pictures of unusual insects for a while now.  So far, I’ve contented myself with photographing the ones I see around our house, in the front or back yard.  Some of insects I find are alive and well, like the one on the lily blossom Wednesday morning, but oftentimes I discover them only after they’ve shuffled off this mortal coil.

Alright, so now you know I take pictures of dead bugs.   Now you begin to see how seriously deranged I really am.  But is that really so terrible?  Is it my fault that some of the most interesting-looking bugs just happen to die in our yard?  Is it really so twisted that I photograph them in their deceased state?  It’s not so different from the people who take pictures of driftwood on the beach, is it?  After all, the wood used to be a living thing too, didn’t it?  Let me remind you I live in , in the middle of a desert.  Where am I going to find driftwood?  Why can’t those of us who take pictures of dead bugs simply be looked at as the driftwood people of the landlocked city?

And photographing dead bugs is not without its advantages.  Unlike their living brethren, dead bugs don’t feel particularly compelled to hide, so you’ll often find them on your front porch in the morning, as though they were just about to ring the doorbell when they just keeled over.   And dead bugs don’t have the annoying habit of buzzing off just when you’ve locked in on them with the macro focus, or fluttered away in the everlasting moment between when you press the button and when the camera’s shutter finally clicks.

Or maybe I just need a better camera.

Anyway, over the last year or so, I have accumulated enough of these photos that I’ve been toying with the idea of starting a new section of the blog called “Dead Bugs I’ve Found Around the House.” It’s just a working title, but at least it’s clear and descriptive.  I’ve even thought about starting a new blog just for those pictures, since I don’t want to turn off readers who come to thunderstrokes for the light-hearted and possibly even inspiring things I sometimes put up.  But, honestly, the prospect of keeping up with two blogs is just too daunting.

And by the way, I don’t photograph dead bugs because I am a morbid person by nature.  And my reason for posting them would not be to creep people out, although I might have a hard time proving that.  The truth is simply that insects fascinate me.  I am beguiled by the endless variation in shapes and colors and by all the tiny intricacies of their tiny insect bodies.  It honestly astounds me that the insignificant slice of urban land that my family calls home can serve as the habitat for hundreds of different species of six-legged critters.

Insects, in and of themselves, are incredible creatures.  Not all of them.  I could live without the houseflies, and mosquitoes, and right now, the cicadas.  I’m talking about the uncommon, unfamiliar ones, the ones that shock you a little when you first notice them because they look so alien, so outlandish, so impossibly different.

Look at what I found, right here in my own backyard!  You’ve gotta see this!  That’s the impulse I feel when I find a Palo Verde beetle longer than my three-year-old’s shoe engaged in upside-down planking in my driveway.  That’s the impulse I’ve been fighting by not posting pictures of bugs like that on the blog.

To me, these creatures are like small blessings, tiny gifts of wonder plopped into the middle of our everyday world to remind us how abundant, how absurdly full of possibility, how truly spectacular life is.

But that’s just me…

I returned from dropping Maria off about ten minutes later and checked the lilies again, not expecting to see my strange interloper.  To my surprise, not only was the bug still there, but it was grasping, in several of its clutches, a wasp.  I couldn’t believe what I was seeing.  I pulled out the camera, and snapped a few more photos.  The wasp appeared to be dead, or paralyzed, because its legs were drawn up rigidly in that ‘dead bug’ pose with which I, for one, am so familiar.  The yellow, red and black bug didn’t appear to be doing anything other than grasping the wasp firmly, protectively, the way a small child might grip a doll, or a teddy bear that they thought might be taken away. 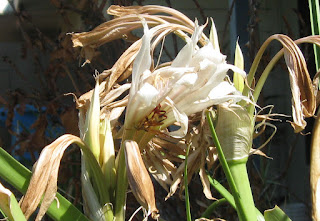 I took a few more pictures, and then went inside.  I pulled out my reliable National Audubon Society Field Guide to Insects and Spiders, and started leafing through.  I found a picture of a bug that was pretty close, although mine seemed to be much more brightly colored than the one in the book.  I looked at the name of the beast below the photo: the Bee Assassin.  That had to be it.  I eagerly turned to page 473, and read the following:

Description:   1/2 - 5/8ths” (12-15 mm).  Variably colored:
red with blackish-brown markings, or
brown with yellowish markings.  Dense
short hair on head, thorax, and legs.
Distance between simple eyes greater
than the distance between compound
eyes.  2nd antennal segment rather
comblike, not subdivided into small
ringlike units.  Nymph is dark and
reddish.
Habitat:         Meadows, fields, and gardens.
Range:           , most common in the West.
Food:             Other insects, especially bees.
Life Cycle:     Eggs are attached to foliage.  Nymphs,
like adults, are voracious predators.  1
generation or more a year in the North.

This insect pounces on Honey Bees and
other pollinating insects.  It holds the captive
in its powerful legs, thrusts its
cutting beak into the victim’s back,
injects an immobilizing digestive
agent, then sucks out the body juices.

Admittedly, most of what I read didn’t make much sense to me.  But that last paragraph – whoa!  A bug that kills its prey by stabbing it in the back, liquefying its insides, and then slurping down the resulting mix like a Jamba Juice smoothie.  Wow.  I always thought exoskeletons were cool, until I found out they could be used to turn a bug into a bottle. 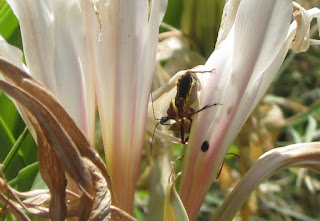 I wished I had been there to see the attack.  Savage though it undoubtedly was, I would have felt privileged to witness such a thing.  An assassination, right there in my lily patch!  You’ve got to love a bug with such a fine sense of irony.

It made me wonder what else might be going on literally beneath my feet.  What other  subterranean intrigues: bar fights, gang hits, skirmishes, full-scale wars?  I wondered if the assassination might have been politically motivated.  Did that poor wasp, as it felt the razor-sharp beak plunge in its back, the hot poison already beginning to dissolve its organs, turn its head one last time to see his attacker, and say, “Et tu, B.A.?”

I’m not sure what this miniature ‘murder in the cathedral’ does to my whole, happy, ‘insects as tiny gifts of wonder’ theory.  But the events of that morning definitely reminded me of one thing:

Insects are fascinating, aren’t they?