As we speak, Dorina Groves is somewhere east of here, here being , the home she left a few weeks ago.  She doesn’t have a home anymore; not in the sense you or I think of home, at least not for now.  She sold or gave away almost everything (she did keep some books, and her two dogs, Roscoe and Riley).  She walked away from the free rent she had at the apartment complex where she worked as a property manager.  She sold the coffee shop she owned and ran by herself, and traded her car for a ’78 Dodge camper.  Before she left, she painted it, which she variously calls her ‘hoopty,’ ‘the beast for the east,’ and ‘sexy b*tch,’ with bright stripes of purple, blue, green, and yellow.  Also painted on this tired old camper are the words, “If you have a pulse, you have a purpose.”

Those words are the reason for everything she’s doing.

She would probably be the first to agree that she’s no stranger to taking chances.  This is a person, after all, who once drove from her home in state to just to interview for a job as a housekeeper.  In 1996, she drove to to find a job in motorcycle racing just because she thought it would be cool.  No experience in anything related to racing, no connections; she just knew she wanted to be involved somehow with the sport.  She did get a job, and rose to the level of Media Manager for the AMA Chevy Truck Superbike Championship in '02.  A willingness to travel seems to be in her blood.


She would probably also agree that she has a pretty tough background:  tough childhood, tough adolescence, tough marriage, tough jobs, tough times.  How tough?  She will tell you tough enough that there was a time when she was asking God to take her while she slept, because she couldn’t take the pain of living anymore.  This was after she moved to Arizona to get away from a bad marriage, and then had her job disappear when the business closed, and found herself lost in the hopelessness of a five month stretch without work.  It was a desperate time for her.  She was alone, and she reached a point where she didn’t know how she was going to make it.  Then she stumbled across the words, “If you have a pulse, you have a purpose.”  Those words were enough to keep her going.  She soon discovered that they were more than a thread to hang by; they were a lifeline to live by.  Eventually, she got a job working in a coffee shop, then another, and then she had the opportunity to buy her own place, which she ran for a year-and-a-half, until a month or so ago, when she sold it, and bought the hoopty.

It was at The Coffee Grove where Dorina’s spirit began to flourish.  She wanted this place to be different from the places she had worked at.  She wanted to instill a sense of, in her words, “happiness and joy and inspiration.”  She started a “Get Inspired” wall, where she began to post inspiring quotes for her customers on white index cards.  Soon, customers were adding their own, and the cards took over a whole wall in what is a very small store to begin with.  She ran The Coffee Grove by herself, and, for awhile, it was her world.  She loved interacting with her customers.  “They’re so much more to me than customers,” she told me on one of her last days working at the store.  “They’re family that is buying the product and supporting the business.”  She felt lucky, blessed even, by her customers, and the shop.  “I don’t feel like I come to work.  I feel like I come to play, and get to have little bank deposits put into my heart every day.”

But make no mistake.  She was running the business entirely on her own, and it consumed every waking moment of her time and energy.  She realized this when her cousin, Krista, who lived in Oregon, got sick with cancer, and Dorina didn’t make it back to see her before she passed.  “I said I was going home, and I didn’t, and what shook me about it was everything was bigger than her, my shop was bigger than her, my customers, me, me, me, I, I, I.  Nothing can survive unless I’m here.”  That, and the naturally introspective focus that turning forty often brings, plus all the seeking for answers she had been doing since those magical words mysteriously appeared in her life, led Dorina Groves to radically change course again, ultimately resulting in the hoopty, and her current location, which is somewhere east of Phoenix. 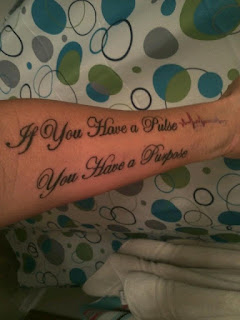 Armed with her message of inspiration (literally; she has the words “If you have a pulse, you have a purpose” tattooed down the length of her left forearm), she is determined to spread hope everywhere she goes.  This is the complete extent of her plan.  Well, she does have a notion to wind up somewhere in , and a dream of settling down in that vicinity, “in a quaint little town,” and writing to inspire full-time.  But nothing more firm than that.

How can somebody do such a thing?  At forty years old, give up everything and set out without a plan, with nothing more than a road-weary camper, two dogs, some books, and a tattoo?  That’s the question, isn’t it?

And there is an answer, a perfectly crazy, and perfectly reasonable, answer, as there always is whenever a leap of faith is involved.

But I’ll let her tell you that part of the story in her own words.