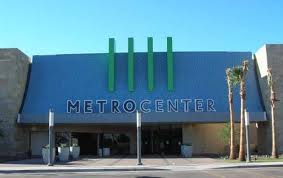 While reading Sunday’s business section, I saw that Metrocenter Mall in was just sold for 12.2 million dollars.  Go ahead, read that again; I’ll wait.  Yes, the decimal was exactly where you thought it was.  Still don’t believe it?  Here, maybe it will help to put it this way:  Twelve million, two hundred thousand smackeroos, or, for the sports fans out there, just over one-third of Alex Rodriguez’s annual salary.   Who would have believed that one of the nation’s biggest shopping malls, one that was valued at over $200 million in its heyday, would end up selling for a paltry $12 million?


Meanwhile, the Valley’s most expensive home sale in the same week was a place in (do I need to say it: on a golf course) for 2.1 million dollars.  Turns out a nice couple bought it, and to them we pass along our congratulations.  I just hope they’re not suffering a case of buyer’s remorse.  After all, for a measly 10.1 million more, they could have had an entire shopping mall to call home.

The nice couple bought a 6,948 square-foot home in the rolling foothills of scenic .  But did they know they could have had so much more?  Metrocenter has something like 1.4 million square feet, which averages out to $8.50/sq. ft., in contrast to the $303/sq. ft. of that place in the “West’s .”

Now I’m sure that the view from the back patio was dazzlingly beautiful, and a major selling point.  But how much enjoyment can you take from a pretty view when you have to regularly duck the blazing misfires of drunken amateurs teeing off the fourteenth hole?  Let’s face it, having a window repair company on speed-dial is no way to live.  And then there are the scorpions, and the gopher holes, and the interloping coyotes looking to snatch your high-priced pocket pooch for a Scooby snack while you are busy trying to communicate with the guy who’s trimming the bougainvillea the wrong way.  These are things the real-estate agent probably didn’t mention.


I understand that the mister is a former race car driver as well as a businessman.  I wonder if anyone has told him about the speed traps in yet?  I have a feeling he would have been much more comfortable in the area around  Metrocenter, where it’s not unusual to see cars street-racing through traffic at speeds familiar to F-15s without raising eyebrows, and that’s in the school zones.

Perhaps the happy couple has heard that the west side has a reputation for being a little sketchy?  Perhaps they were worried about the auto-theft rates, and having their car (sorry, cars) stolen?  Too bad they didn’t realize that if they owned Metrocenter Mall, they could have set aside 10,000 square feet of unused indoor, air-conditioned space for their own personal parking garage.  During business hours they’d even have their own contingent of mall cops to look after the Ferraris, Lamborghinis, or whatever it is that rich people are driving these days.  Forgive me for not knowing; we west-siders get nervous with excitement anytime we see even an Escalade cruising by.  Just last week I saw a gleaming white Mercedes driving on west Glendale Avenue and pulled over because I thought the pope was back in town.

There are many other advantages to owning Metrocenter for a home.  Imagine being able to walk around the mall like you own the place, because, well, you would.  No need for a kitchen, or a kitchen staff, for that matter:  you’ve got Cinnabon for breakfast, pizza for lunch, and your choice of several varieties of Asian, Mexican, subs, and what not for dinner.  No muss, no fuss.  No dishes to clean, no groceries to buy, and no worries that the help is slowing smuggling the silver out one spoon at a time.  It’s a la carte and all you can eat.  Honestly, what tenant is going to tell the owner that they can’t help themselves to another Hot Dog on a Stick?  And if you get the late night munchies, who’s really going to complain if you sneak a few of Wetzel’s pretzels, or a couple Dilly Bars from the Dairy Queen?

When it comes to entertainment, the options are unlimited.  For one thing, you’d never have to leave ’s version of the Pentagon.  How about your very own movie multiplex, featuring 12 screens of cinematic bliss?  And even better, it’s a Harkins.  I bet you wouldn’t even need to buy a cup and t-shirt to get the deals, because, remember, you own the place.  Just put Mr. Harkins on the phone with the terrified teenager behind the counter.  Or how about doing something completely grandiose and a little crazy, like installing an ice-skating rink, or hanging the fuselage of a 747 on the wall and turning it into a bar for competitive drinking tournaments?  Or, just make the lower level into a racetrack.  You could have impromptu sprint car races anytime you want, since the odds of actually hitting a shopper are mathematically negligible.  And if all these options are a little too Michael Jackson for you, don’t forget the immeasurable entertainment value that can be had simply by watching the Golden Sneakers members slowly circling your gigantic indoor courtyard.  On second thought, that sounds a little too Michael Jackson.

For animal lovers, here’s another great thing; the county’s Animal Care and Control has opened up a pet adoption center inside the mall.  How great would that be?  They feed ‘em, wash ‘em, clean up after ‘em, and see to all their medical treatment.  All you have to do is walk in and start loving them up.  What a fantastic form of pet ownership.  It’s like being a grandparent for pets.

Of course, we still have to deal with that backyard view, don’t we?  Well, that is a toughie.  But I bet from the roof of Metrocenter you can see the same mountains that you’d be looking at through those custom French doors – plus a whole lot more.  Why, there’s every reason to think that aside from all the mountains, you would have the added bonus of witnessing any number of muggings, robberies, police chases, and road rage incidents, all from the comfort of your rooftop chaise lounge.  Imagine relaxing poolside (why not put a pool up there, you just bought a mall for heaven’s sakes!), watching through high-powered binoculars as yet another thief is taken down by mall security as he tries to abscond with one of those massage chairs sitting out in the middle of the concourse.  Puts a whole new spin on the concept of urban wildlife, doesn’t it?

Here are a final few perks that purchasing Metrocenter would bring with it:

If you need help hooking up your all your computer and media gear, I’m sure the manager of Radio Shack won’t mind you borrowing a couple of tech-heads for however long it takes to set it up.

Don’t underestimate the enormous cachet that comes from being able to drive folks from back home around town, point over the west wall of I-17 between and Dunlap and say, “See that big building over there?  No, back behind the Texas Roadhouse.  No, not the funky, miniature nuclear reactor building – that’s a Souper Salad.  The really big one behind it… the one that looks like it could be a shopping mall?  See it?  That’s my place!”

And for those romantic evenings, ’s of still has a store at Metro.  Just sayin’.

I hope I didn’t make the nice couple feel too bad about their decision.  I’m sure they’ll be perfectly happy living in their secure, snug, gated community far from the sirens and the police helicopter hoverings that we in the Metrocenter area are accustomed to.  You know what?  Now that I think about it, I’m glad they didn’t buy it.  The price only has to drop another 12.15 million dollars or so and I’ll be able to buy it myself.  With the way things are going, I might just have a shot.

But seriously, don’t forget to watch out for those golf balls.  I, for one, am a terrible golfer, and I do all my golfing in Scottsdale.  It's safer there.


Bonus material:  a brief look at Metro dating back to the late 80's, when it still had a skating rink, and a Goldwaters:

Posted by Kevin Thorson at 5:30 AM