Glendale's Sugar Beet is Back, Baby! 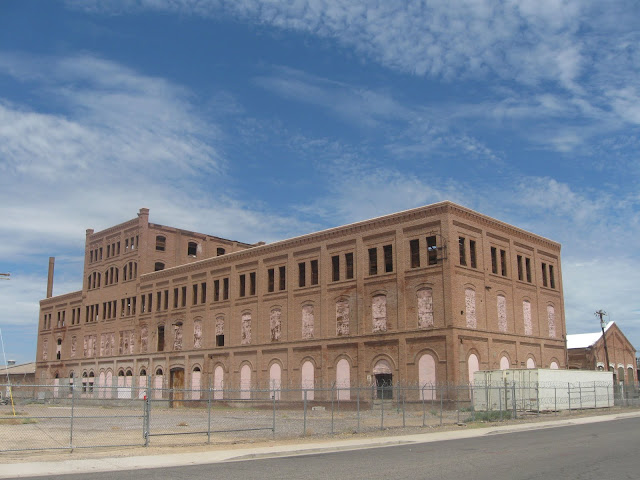 The Glendale sugar beet factory's still airing out.  It's been 100 years; I think the sugar beet smell is gone.

All the westsiders out there know about the old abandoned sugar beet factory that sits near the corner of and .  The building was constructed in 1906, making it 105 years old.  For those of you scoring at home, that’s 6 years older than the state of .  For the last 25 years, it’s also been laying there like a beached whale, which is strange, because we must be at least 350 miles from the nearest ocean.

Ideas, plans, schemes, hallucinations, call them what you will, have come and gone over that time, but nothing has happened except the building hasn’t been torn down, which is actually something.  Now it finally appears that the building’s survival strategy (such as it was) is about to be rewarded.  A family recently purchased it and has just announced that they will be restoring the factory to its former purpose.  Back to a factory that is, not the sugar beet part, which is lucky, because we once had the offensive olfactory experience of encountering a sugar beet factory in , many years back, and can fervently attest to the desire not to be near one of those again.  It was so bad, we were actually trying to provoke skunks into spraying us just to get the sugar beet factory smell off our clothes and skin.  Uh, just a moment, I’m getting a truth-in-writing disclosure look from .  Alright, they weren’t actual skunks, they were Mr. Stinker gas stations (but they did have a skunk wearing boxing gloves as their mascot), and it was gas fumes and not skunk spray, but you get the point.  It’s a bad smell. It’s a bad, bad smell.

The family has decided to refurbish the factory and turn it into their production facility for a line of locally-produced alcoholic beverages.  They plan to open the factory to visits, and will feature a tasting area for their specialty line of vodkas, and other similarly spirited offerings.

For one thing, it will be nice to have a higher class of liquor store in the neighborhood.  We probably have 5 of the drive-thru variety along the two miles of Glendale avenue between our house and the factory, only exceeded in number by tattoo parlors and check cashing (excuse me, auto title loan (wink, wink)) stores.

Seriously, this could be a great thing for , and hopefully a good thing for the sugar beet factory.  Downtown (the factory sits on the very eastern fringe) has worked hard to make itself into a destination, and this could become an important piece of the critical mass puzzle.  The area is already recognized as the best place in the Valley to go antiquing, and is the center of the city’s most highly regarded local restaurants (Haus Murphy, La Piazza al Forno, Little Saigon, etc.).  It’s got Cerreta’s chocolate factory (which also does tours, and better yet, sells chocolate), the best pet shop ever at Pratt’s Feed, and of course, my high school lay just beyond the tracks of .  The city does a great job of promoting the area with festivals and concerts year-round and, of course, Glendale Glitters during the Christmas season.  They’ve put a lot of hard work into making the area blossom, and it’s a sign of success that Forward Brands LLC has chosen to set up shop there.

And kudos (Why do I use that word?  It always makes me think of herds of large antelope stampeding across the African savannah.  Oh . . . wait a second, tells me those are kudus, not kudos. That makes more sense then.)  to the Klemp family and Forward Brands for having the vision and desire (not to mention the means) to protect and preserve a major piece of Valley/Arizona history.  According to the , the city is contributing no public money to the project.  That’s right, no public money.  D’ya hear that, Goldwater Institue?  You can go sniff someone else’s butt for a while.

And this project is not risk-free.  As far as I can tell, the success of this particular business endeavor is predicated in part on the proposition that it’s possible to drag the high-falutin’ Scottsdale crowd four miles east of Westgate, into the barrio, without the use of handcuffs and tasers.  Although, the last time I checked the standings, the north Glendale ZIP code of 85308 still had the highest per-capita income in the Valley (I don’t know what that means; I just know it irritates the crap out of those aforementioned high-falutin’ Scottsdale types).

I just hope that the Klemps’ and Forward Brands’ business model isn’t relying too much on neighborhood traffic to keep it profitable; after all, with all due respect, this is an area where you’re far more likely to overhear a heated argument over the superior bouquets and finishes of Colt .45 vs. Schlitz.  A custom-made line of flavored vodkas will probably elicit the same uncomprehending look from residents that I have when Elizabeth starts talking about the pluses and minuses of MAC vs. bareMinerals foundation.

But I do wish them success, and not just because I have a vested interest in seeing my house value increase above the price my wife’s father paid for it in 1982.  The big story here is that a legendary building, the sugar beet factory, is going to live again!  For that reason (and that reason alone, I swear!), I pledge to begin drinking as much Forward Brands vodka as possible, starting now.

I hope you’ll join me.


P.S. If you're curious about the beet sugarification process, check this out. Notice the definite Chamber of Commerce spin on the whole smell issue right at the top.  You're not foolin' me, mister.

Posted by Kevin Thorson at 6:08 AM